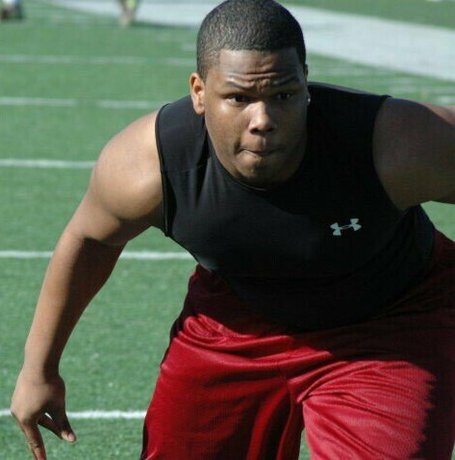 Butch Jones is putting together a hell of a recruiting class. This much is for certain. He is rutinely going up against BCS schools and winning battles. The latest battle to be won was over Alez Pace, a 6'3" 280 defensive tackle from Glenville High School on the East side of Cleveland. Pace is going to be a classic 1 technique defensive tackle. Derek Wolfe plays the 1 technique, not saying that Pace will be an All America like Wolfe, just that his skill set mirrors Wolfe's

To me the most impressive thing about Pace is his first step. When looking at defenisve linemen and trying to project them out to the college level the get off is the first thing you look at. A good DL coach can teach technique, but its impossible to teach get off and flexibility. Great defensive linemen have both, good ones can get by with one or the other. Pace has a fantastic get off. Often times he is the first guy in the backfield blowing up plays. The other great thing about Pace is his strength. At the high school level he just flat out overpowered offensive linemen with his bull rush.

Pace hails from the traditionally talent rich Glenville program. For a while UC had a pipline going to the Eastside school under Rick Minter and Mark Dantonio. Curtis Young (AKA Pig)and Angelo Smith are the most prominent members of the old Glenville pipeline, or maybe just a line to be more accurate. Alex Pace is the first Tarblooder to commit to UC since Freddie Lenix back in 2006, and Lenix never made it to the field in Clifton. Pace fielded half a dozen offers from BCS schools (Indiana, Illinois, Pitt, Syracuse, Vanderbilt and West Virginia). In the end it came down to Illinois and UC and the Zoooker getting fired made it something of a foregone conclusion. Pace is the 28th or 29th commitment(depends on who you ask) in the class of 2012.