Breaking Down The Bearcats Schedule

Share All sharing options for: Breaking Down The Bearcats Schedule

The schedule is out, and all is well. I would have hoped that the schedule would have been out before this, but with two teams, three now I guess, sharing NFL Stadia with more cash rich "partners" it makes to process a little bit tricky. Mechanics aside the slate of 12 games is out and it is time to get excited about football, or if you are still excited about Basketball you can bookmark this and save it until UC's season is done sometime in April (crosses fingers).

The attractiveness of any of these games will be measured on the Ron Swanson scale. Did I hear you ask what is the Ron Swanson Scale (RSS in brief)? Briefly, it is the most comprehensive and accurate metric on the planet, regardless of subject. The five levels are thus

You had me at meat tornado

I like this game. I am surrounded by a bunch of women this season. And that includes the men.

Sure, how about you shoot me in the head. Oh wait, you already did that

There, the greatest measurement scale ever. You're welcome humanity

All due respect to the mighty Governors of Austin Peay (very little) but the season starts in Knoxville. I know that Tennessee isn't the program they were 10 years ago, or even five years ago, but this is still a massive, massive opportunity for UC. Tennessee is still a name program and a win in this game would do a lot for UC in the attempt to prove that the run from 2007 to 2009 wasn't an aberration. Not to mention the credence this game would give UC in their attempts to recruit in SEC country. Going into this kind of environment and winning would be awesome.

Its the Keg of Fucking Nails. 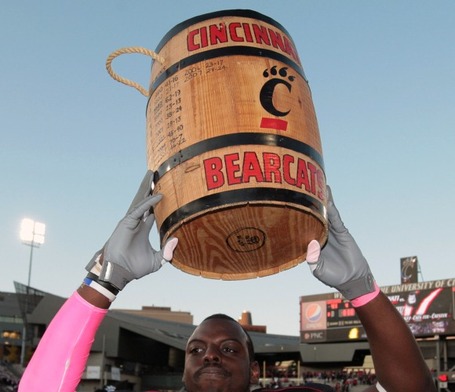 What else needs to be said?

West Virginia are the prohibitive favorites for the conference as I write this preview here in February. The coaching situation might be a mess in Morgantown, but Bill Stewart is too nice of a guy to get in the way of Dana Holgerson bringing his smooth jazz stylings  to what has been an immensely talented but immensely underachieving offense, It doesn't hurt that WVU's last two trips to the Queen City have been very eventful.

The last time these two teams met didn't go so well. OK it was an unremitting hellscape of a game. But NC State is probably going to be without Russell Wilson this year. Probably. You never know though. Regardless this will be another opportunity for UC to pick up an out of conference BCS win, and the last such occasion. It is also a home Thursday Night game, and UC is undefeated on Thursday nights since entering the Big East.

I always look forward to the USF games. They are nearly all interesting and enthralling contests. There is usually a bit of drama and UC almost always wins. What's not to love there? The Bearcats return to Tampa site of two of the most outrageous UC games of the last decade, one was just off the wall crazy, and the other one involved the greatest 10 second shift in emotion I have ever had at a sporting event.

Yes this is a rivalry game, complete with the most unwieldy of all possible rivalry trophies. On second thought I guess I will concede that distinction to the Fremont Cannon. But this pick is more about me being a total Football nerd. The reason I am really excited for this game has much more to do with the implementation of the Herb Hand/ Gus Malzahn offense in Pittsburgh. I know that neither of them will be in Pittsburgh, but the legacy lives on because the offense will look a lot like this.

Syracuse has started to turn it around on the field under Doug Marone. But that isn't the reason I am excited for this game. Sure it would be nice to get the Orange back for putting an emphatic stop to UC's school record 14 game Nippert Stadium win streak. But the reason is a little more sentimental for me. The one school I was looking forward to playing when UC joined the Big East was Syracuse. But since joining UC and the Orange haven't quite been equals as one school or the other has had a leg up. That should change this year.

The bi-annual trek to Nippert West for the Battle for the Bell. UC has won five in a row in the series and is one win away from setting the series record win streak, for either team. I will admit that while I always look forward to beating Miami of Ohio this one could be awkward due to certain interloping person connections.

Hard to get excited about this one. I always looked forward to playing UConn but since Randy Edsall and his Pyramid of Greatness have jumped ship to Maryland it feels like the spark is gone.

Its really hard to get excited about playing a team who has gone 4 and 20 over the last two years and is currently the second most attended Football program on the campus. The other? The National Champion Akron Zips soccer team.

It would be better if we didn't be them every. single. year.