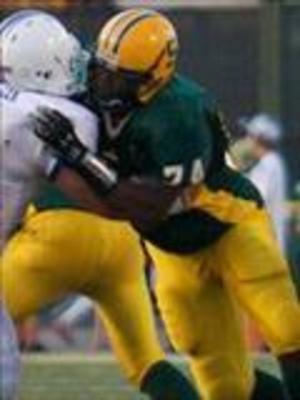 Murray was a multi year starter at Sycamore High School. I believe, but I don't know definitively, that Murray was a prominent fixture of the offense when Bud Golden was running roughshod over the  GMC. Regardless Murray was a two time 1st team All GMC selection in 2009 and 2010.

But Murray isn't just a brute he is pretty athletic for his size. Personally I like to see offensive lineman who throw shot and Disc because to throw the Disc, and to a lesser extend, the Shot requires great footwork and flexibility, two key attributes for offensive lineman. Murray advanced to the regionals in both events. He went to State for the shot and placed 6th. In the shot he was actually ranked nationally last year. All of which is lovely to see because it implies an athletic ability from a lineman that is required at this level. Scott Springer has more on Murray's exploits in track here.

The best thing about Murray is his athletic ability. He weighs 250 pounds, but he carries it well and is shockingly athletic for a guy at that kind of size. Murray holds the point of attack well, but where he really shines is tracking up to the second level where he has no issues what so ever hunting down smaller quicker linebackers and blowing them off the spot. If there is an area for him to work on it is probably anchoring against the bull rush. He didn't have to worry about that in high school, but he will at this level.

He will need a couple of years in the weight room to get him in the vicinity of 300 pounds so obviously this year is a red shirt. But once he has that bulk he should be a long term starter for UC. Given the complete uncertainty at the offensive line positions I don't think it would be out of the question for him to be a starter as a Red Shirt Sophomore he is that good technically and that athletic.