Share All sharing options for: Monday Recruit Roundup: Week One 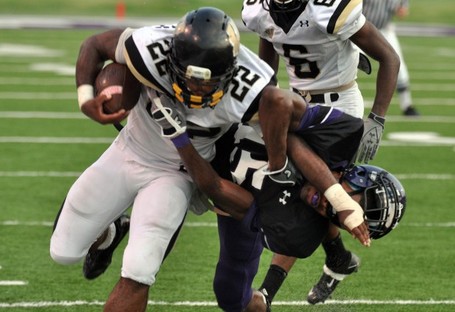 High School Football has kicked off across the country this week. We here at Down The Drive plan to keep track of all of the recruits currently committed to UC and their progress in this, their final seasons at the high school level. The majority of the country will kick off in the next couple of weeks, but there are a couple of states that are faster off the mark, Indiana and Tennessee being a couple of them. The teams of eight future Bearcats were in action this past weekend.

The headliner among the Indiana Schools from any perspective is the Warriors of Warren Central. WC entered the year with high praise dutifully heaped upon them by just about everyone. And with good reason. As of today 9 Warriors are committed to Division 1 schools, 8 of them to BCS schools. Butch Jones and his staff have secured commitments from 4 of them to date with a couple of other prospects on their radar.

Saturday the Warriors made the two and a half hour trek North from Indianapolis to Merriville. Merriville is traditionally one of the stronger squads in Northern Indiana and started the year ranked in Indiana's pre season poll. But when the lights came on the gap between the two squads was evident. WC rolled to an easy victory 62-13 with Deionte Buckley playing a big role in the blow out. Buckley ran for 133 yards and a TD on 16 carries in the first half alone. He finished the game with 188 yards on 21 carries with 3 TD's.

"Their O-line got incredible movement," Wells said. "It’s as much movement as I’ve seen an offensive line get in a very long time."

WC rolled up 612 yards of total offense including 325 yards on the ground on 50 carries (6.24 yards per rush). The Warrior Defense was stout as well. After surrendering 13 1st quarter points Merriville didn't light the scoreboard again. DTD member Chicago Bearcat reports that Jonathan Burt had a sack and that Josh Posley didn't make a splash on the night. Still the defense held Merriville to 197 total yards and forced four turnovers.

UC's other Indiana commit, Safety Kevin Brown, was also in action this weekend. Lawrence Central was last years state runner up and was found their way into a pre season #4 ranking in the state. They kicked off this season with a match up with cross township rival Lawrence North. The Bears prevailed in the contest 42-13. Brown keyed a defense that allowed just 142 yards of offense, just 48 of them via the pass, forced two fumbles and allowed 8 first downs in the entire game.

In Kentucky UC commit Drake Bruns set up a third quarter TD with a 57 yard interception return in Highlands 35-14 win at Boone County. The win snapped a 30 game home winning streak for the Rebels. Bruns led a defense that limited Boone County to 241 yards of total offense. Vinny Miller did not participate in Lexington Henry Clay's season opening 56-6 loss to John Hardin. I don't know if Miller's absense is due to injury or something else. But he missed the last scrimmage of the year.

Lastly future Bearcat Alex Dale of the Memphis University School kicked off the season as well with a match up with Tennessee's defending 2-AA state champions Nashville Ensworth. MUS went down on the night 28-14 as the Owls had no answer Corn Elder who scored three TD's and set up the 4th with a long interception return.