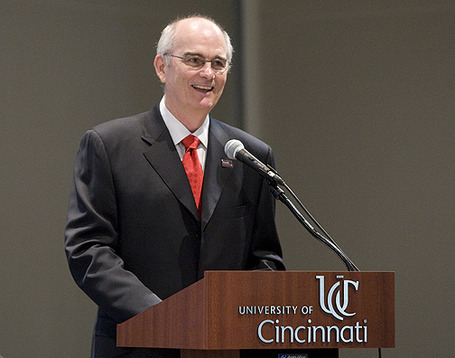 When the news broke last night that Syracuse and Pitt were leaving the Big East for the ACC I wasn't terribly surprised. It was a matter of time. The internal conflict within the conference has raged since the Big East first decided to field a Football conference in 1991. This kind of massive fracture has been out there. It was always a question of when, not if it would happen. So with all of this happening now, and things moving at such a rapid pace the question is where does UC fit into the puzzle. UC has been proactive behind the scenes, if not publicly looking out for their own interests. UC would be expected to band together with Louisville, our biggest rival yes, but also the school that is most similar to Cincinnati, and also the school that UC has moved into and out of conferences in tandom with since being charter members of Conference USA in 1995. As this story has been developing  officials from UC and Louisville have come out and made effectively identical statements. Here is the statement from Gregory Williams

"We’re having a lot of conversastions right now, which I can’t divulge," Williams said. "This is not something that we’ve been sitting on the sidelines. I talk with (Big East commissioner) John Marinatto  on a regular basis. This is a very fluid situation.

The very fluid situation line was followed up with this

"We’re always trying to get information about what’s going on. We’re not trying to jump to another conference. We’re committed to the Big East. We think the Big East is a great conference, one that’s really right for us.  That’s what we’re committed to and hopefully that will be able to continue.  If not, we’re still going to be (well) situated because we’re a strong athletic and academic program."

All of which means that UC is committed not to the Big East, but finding the best situation for the University of Cincinnati.