Matchup Of The Week: Bearcats CB's vs Vols WR's

Share All sharing options for: Matchup Of The Week: Bearcats CB's vs Vols WR's 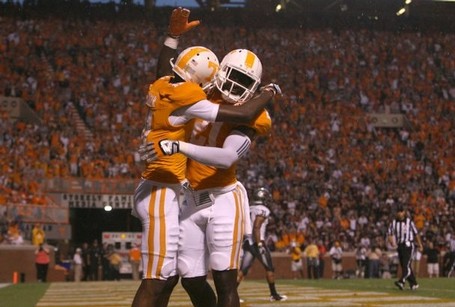 Each week I am going to take a look at a matchup (or matchups) that will play a large role in determining the outcome of the weeks game. This week it's the Cincinnati Corner Backs, Deven Drane and Camerron Cheatham, against the Volunteers Wide Receivers, Justin Hunter and Da'Rick Rogers.

One of the things that I love about Football, college football in particular, is that it is possible for a one v one matchup to largely determine the outcome of a game. The discrepancy in talent level being what it is (hint: It's massive) one or two players playing to their capability can have a monumental impact on the game. Take Auburn last season. Without Cam Newton that Tiger team wouldn't have sniffed a BCS bowl. But the magnitude of Newton's talents was such that he dragged a fairly average supporting cast to a national championship. Now the point I am making isn't so much that Rogers and Hunter are transcendent talents who are capable of destroying any defense aligned to limit their impact on the game. Don't get me wrong, they are both vastly talented wideouts who were both ranked in the top 10 or so of wide receivers by the recruiting sites. But to this point in their collective careers they aren't there, they could reach that level of dominance by the end of the season. Hell they could be right now, but it's hard to tell for sure because the only game on the resume is torching Montana. And as impressive as they were last week, its still Montana.

The reason that I think this matchup will be vital to the Bearcats has a lot to do with the Tennessee run game. Last season the Vols were among the worst teams in the country running the Football. Running the ball in the SEC is always a hard slog, but the level of competition doesn't quite explain away averaging 3.48 yards per carry.

The Vols have two very capable and talented backs in Taureen Poole and Marlin Lane. You could probably make that three if and when Rajon Neal gets healthy. But the Vols manged just 128 yards rushing against Montanta on just 2.78 per carry. I don't envision Tennessee having much more success than that running the football against UC. The Bearcats have two legit 300 pound tackles who will be in NFL camps next August in Derek Wolfe and John Huges with Walter Stewart and Dan Giordano at the ends forming a capeable pass rushing duo. At the second level UC has three deep experienced linebackers with Ben Pooler, Maalik Bomar and J.K. Schaffer. Montana has a good front 7 for an FCS team. UC has a good front 7 for a BCS team. It's not great and its not elite by any stretch. But UC's front is pretty good and certainly good enough to make Tennessee one dimensional.

Which brings me to what is going to be the most important match up of the game, Cameron Cheatham and Deven Drane going up against Da'Rick Rogers and Justin Hunter. This also will have a lot to do with Tyler Bray and his approach to the game.

The basic primer on Bray is that he wants to push the ball deep. That is his first instinct. last season Bray averaged 8.3 yards per attempt*. To put that into perspective in 2009 at the helm of an all vertical, all the time offense Tony Pike averaged 7.5. Of course for Bray that was last year and QB's grow and evolve under time,
*for more on the yards per attempt statistic check here

By all accounts Bray had one of his best games in Tennessee Volunteers uniform last Saturday against Montana. But the questions about decision making will continue to linger. I anticipate that UC will set up defensively to take away the deep ball and force Bray to be patient and work the ball underneath to his backs and tight ends. That means a lot of cover 3 and cover 4 looks from the Bearcats.

Ostensibly both of those coverages schemes are zones. But for the corners they are basically man on the primary receivers, in this case Hunter and Rogers. One thing that I will be watching for is how Cheatham and Drane align. On the depth chart Drane is the boundary corner and Cheatham the field. But I would look for them to flip sides based on where Rogers and Hunter line up. I would have concerns about Cheatham being matched up with Rogers due to the massive height/weight disparity between the 5'8"ish Cam and the 6'3" Rogers. I think Drane should do better against Rogers than Cheatham. But Hunter is no slouch in terms of height at 6'4", but he doesn't project the physical presence that Rogers does.

All in all this should be a fascinating match up and one that I think will turn the tide of the game one way or the other. If Hunter and Rogers run free like they did against Montana it will be a long afternoon for Bearcat fans. But if Cheatham and Drane keep the big receivers in front on them and limit the big plays UC will be in the game until the end because I have a feeling that the Vols will struggle to keep tabs on UC's offense.