Still recovering/can't get enough of last nights heart stopping win over UConn? Down The Drive has you covered.

There was no buckle for Cincy. It earned a 10-point lead with less than two minutes to go and got a brand of road win that 10 other teams won’t lay claim to this year. This team is better than you want to believe. Time to set your notions of what this team is to the side for now. The Big East, in a down year, has Cincinnati as its second-best team. It may not last for more than a week or two, or maybe this team gets to Manhattan with a 14-4 league record and a complete tonal change on its season.

"It would have been a tragic loss when we started missing free throws up 8 with our best foul shooters getting fouled," head coach Mick Cronin said after the win. "We kept it exciting I guess for the ESPN boys."

UC has certainly been value for money on ESPN2 this season.

I’m also forced to single out Yancy Gates for his performance tonight. His numbers speak for themselves notching a double-double with 13 points and 12 boards. But it was his performance defensively that really stood out. For instance, super-frosh Andre Drummond only had 4 points. That’s all you need to know about how well Gates played tonight. He was physical, he boxed out, he owned the boards, and he played to the potential that every Bearcat fan had hoped he would in four years at Cincinnati.

Yancy was superb against Drummond for the duration. But he didn't do it alone Justin Jackson and Mbodj played Drummond at times. But in the second quarter Gates shut down Drummond

UConn fouling. SK to the line for the 1-1. Missed. Napier 3. 5 point game. Dixon to the line. Make miss. Napier airball. That was a stupid shot. SK is fouled. Missed again. Napier drills a 3. 63 seconds left, 3 point game. Timeout Mick with 54 seconds left. Wanted to see what UConn was showing. Gotta score here. Cash dribbles. Dixon up to. DRives to the foul line no good. Tapped back to Napier. Napier drives and is fouled. Make. Miss. Dixon fouled with 18.9 left. Make. Miss.

That was a truly terrifying stretch for the Bearcats

Top 10 College Basketball Throwback Uniforms ft. Michigan's "Fab Five" // LostLettermen.com
Like everyone else Lost Lettermen loves the Bearcats old Jordan Uni's. How can you not? 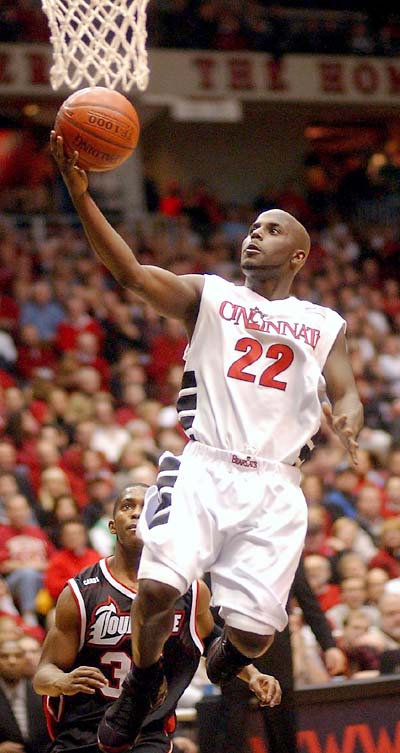 Realignment has thrown a wrench in the Big 12 football schedule // NewsOK.com
It's good to know that Cincinnati isn't the only school who is really getting screwed in the scheduling department because of the ongoing uncertainty with conferecne expansion. Oklahoma might have to load up on creampuffs too.

Arkansas State has announced the signing of former Auburn running back Michael Dyer. A source with knowledge of the situation told the Associated Press last week that Dyer would join the Red Wolves.

Such a weird, weird story with Dyer

Graham: When you leave a place, people will always say things like that. I can't do anything about that. People said the same thing about Nick Saban. All you can do is just prove yourself every day. The world we live in with the exposure and Twitter and everything, it compounds those things, but all I can do is genuinely be who I am. Am I good at communicating? Well, if I wasn't, I probably wouldn't have the job that I have.

Gotta admire 6-6, err, Todd Graham for having the stones to compare himself to Nick Saban. It's really quite amazing that no one likes Todd Graham.