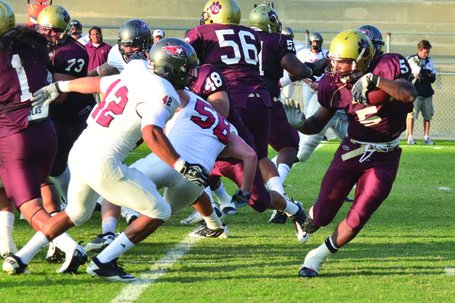 Being that it is one day and counting till signing day this will be a recruiting heavy jump off.

He’s already burned his NCAA-allotted one redshirt year so he will have two years of football remaining. The 2012 season will be runningback by committee entering fall camp. Guys like George Winn, Jameel Poteat, Ralph David Abernathy, Akise Teague, and even Deionte Buckley, who is a member of the 2012 class but already on campus, But even though there’s a logjam, I think Harris will be a serious contender to step in and contribute right away. It’s very easy for runningbacks to adjust from playing in high school to playing in college and it’s even easier when the runningback is just transitioning from JUCO ball. Harris is a highly rated prospect that will fit into Cincinnati’s system nicely. I expect him to be near the top of the depth chart when it is first released this August.

2012: What’s Needed Now: Secondary. After a few years of going after receivers and skill player, the Bearcats need to strengthen a secondary that’ll be fine for the next two years but needs prospects for 2014 and beyond. Offense won’t be ignored, with head coach Butch Jones going after as many top players for the passing game as possible. Small and speedy Dennis Norfleet could be an instant impact running backs used in a variety of ways.

Athletes of the Week: Shakim Alonzo

Are you going to miss basketball once you get to college? Kind of ... No, not really. I don't really like basketball. I just play it.

Gotta love a guy who plays Basketball in high school, calmly averages 20 and 12 but doesn't really like the game and says, and I quote, "I just play it"

Whose stock has risen or fallen this weekend? | The Dagger: College Basketball Blog - Yahoo! Sports

Stock falling: Those formerly considered the Big East's second-best team That label continues to be a curse of death. Cincinnati staked claim to that unofficial title with a win over UConn only to drop three straight to West Virginia, Syracuse and Rutgers. West Virginia inherited it by beating the Bearcats ... and then promptly forfeited it with a 16-point loss at St. John's. It belonged to Georgetown on Saturday, and the Hoyas surrendered it with little fight by falling to previously struggling Pittsburgh. That means that the new owner of the title of second-best Big East team is likely Marquette, which improved to 7-2 in league play with a come-from-behind win over Villanova on Saturday. Can the Golden Eagles maintain that distinction for more than one game? We'll find out when they host Seton Hall next week.

The most disappointing thing about the game Saturday was the intensity. There was none. I don't know if UC just thought they were going to walk on the floor and stomp Rutgers. They sure as hell came out soft. They stopped the points in the paint in the second half, but didn't guard on the wing. They came out hot to start the second half with a 7-0 run. Then a layup, 3, steal, steal and you are down 6 again. UC chips away at the lead late, cutting it to 4. Rutgers calls timeout and runs a play that get Dane Miller a dunk. It was awful. Just awful.

In case you wanted to know what happened to Stephen Weatherford.

Cincinnati: Since 2007, the Bearcats have 26 victories as the "less talented team." That is despite having classes continually ranked lower than West Virginia, Pittsburgh, Louisville and Rutgers. Credit goes to former coach Brian Kelly and current coach Butch Jones for maximizing the potential of their players.

The problem is that the process of recruiting and the stakes at which it is played very often outstrips efforts to constrain it. Worse, efforts to control it often make the situation even murkier for the participants. Because, at its heart, recruiting comes down to trying to maximize your return in a system that vastly distorts the value of the commodities that comprise it.

Top college football talent comes from the South, a shift from more even distribution decades ago - ESPN
Probably the most comprehensive look at an issue that has been discussed at length multiple times. The thing to remember is that this is not a new phenomenon, rather one that has played out over decade

Star Power: Be they ever so humble, recruiting rankings still do the job | Dr. Saturday - Yahoo! Sports

Has the spread stopped spreading in the SEC? | Get The Picture