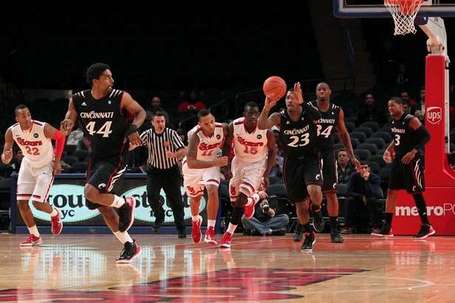 The Bearcats took advantage of St. John’s lack of numbers by using 12 players, nine of whom played more than 10 minutes, pounding the Red Storm on the boards, 49-29, and limiting it to 32.8 percent shooting, primarily by playing a zone defense to contain guard D’Angelo Harrison, who averages 16.7 points. Harrison still finished with 15, but scored most of those after the Bearcats had put the game away. He had only two points at halftime. Forward Moe Harkless, who had the game-winning tip-in against UC back on Jan. 7, scored only six points, 10 below his average.

The Red Storm's offense was poor all night. Amir Garrett and Sir`Dominic Pointer were active early, but the team's main threats struggled to score. Pointer got into foul trouble early in the second half, and that made any hope of a defensive-minded comeback even more difficult. The Johnnies couldn't muster a cursory run against the opponents' second string, and at times lost their man on defense.

September 15th is the date if you're wondering

West Virginia and the Big East Conference are nearing agreement on a settlement worth at least $20 million that would resolve all issues between both parties, college football industry sources told CBSSports.com. The Mountaineers will join the Big 12 for the 2012-13 school year. However, in a bizarre twist, sources told CBSSports.com that West Virginia officials have contacted future Big East members to see if one could join in 2012 instead of 2013.

If West Virginia and the Big East work out a settlement for the Mountaineers to leave for the Big 12 immediately, Rutgers could compensate for the lost conference football game by playing Syracuse twice next season — once at home, the other away — according to two people familiar with the contingency plans being discussed.

West Virginia’s Big 12 break at the root of a ‘bitterly tense relationship’ in the U.S. Senate | Dr. Saturday - Yahoo! Sports

Not that Kentucky Republican Mitch McConnell and West Virginia Democrat Joe Manchin don't have enough to bicker over from opposite sides of the partisan ice wall currently dividing Capitol Hill. According to the website Politico, though, things got truly nasty when McConnell — a Louisville alum and regular at home football games — attempted to lobby on his alma mater's behalf for the coveted Big 12 bid, prompting Manchin — a former West Virginia quarterback turned governor and well-known meddler in Mountaineer football — to call for an ethics investigation over the Minority Leader's role in having WVU's invitation blocked.

And This for sure

No major-conference program is hankering to hitch its wagon to this sputtering star, so raiding the mid-majors is a necessity. But Memphis football is the stack of rotting newspapers in this scenario. "But I need it!" No, Big East. You really don’t. You’re hurting your brand. You’re hurting yourself. Memphis’ financial straits regarding athletic revenue have been well-documented, its on-field product reviled as pale and listless. The Tigers haven’t won more than two games in a season since a 6-7 2008 campaign that culminated in a 41-14 walloping by USF in the St. Petersburg Bowl. The last time they went to a bowl game and actually won was 2005. This is an addition in name only, and one that dilutes a football brand that can ill afford it. What’s more: In moving away from Conference USA, Memphis is endangering a rivalry game with the greatest trophy in the history of this sport or any other.

The truth is harsh. The new look Big East hasn't had an achievement gap. By most measures the conference has held its own over the years. But their is a massive perception gap. Memphis isn't fixing that anytime soon and it will take a massive sledgehammer to that achievement gap to make it bigger