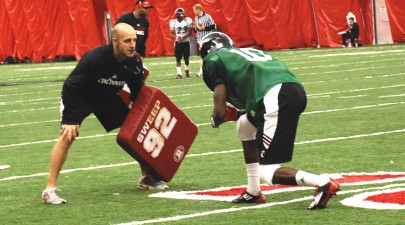 Time considerations are making this jump off slightly shorter than previous iterations. Sorry, but no Et cetera today but what is on the docket is Dan Hoard doing some digging about Mike Bajakian. The offensive architect of this team and most importantly, this year at least, the quarterback coach. Long story short there is an interesting line on Bajakian's CV that you won't find on many other BCS coordinator's resumes. Head Bowling Coach.

For what it's worth Bajakian looks more like a bowling coach than a Football coach. But that doesn't really matter. What matters is whether or not he is a good Football coach, and he is. In five years time Bajakian will probably be a head coach somewhere. That's his career trajectory so we should all enjoy the bowling coach while he is still here.

The Columbus Dispatch went and did a bit of a profile of Isaiah Pead during this, the most important week of his life. When you sit and think about it the transformation that Pead made this year is borderline remarkable. Butch Jones was under the impression that he would need an impact from his back ups in fall camp. That other guys would need to pitch in at the position because Pead can be idiosyncratic. Flash forward to mid September and Isaiah is the guy, the position is all his and he turns in these grinding 20 to 25 touch games week after week. I never would have expected that development to come. Not from Pead who made the Freshman mistake of tapping his helmet for a blow in the Marshall game after getting five straight carries. Brian Kelly's response? Giving him the ball 6 more times before the drive ended with a fumble. Taking that moment as a starting point his transformation to being the back he is now is borderline unbelievable.

Enjoy the rest of your morning folks