Share All sharing options for: Bearcat Bits For April 23rd 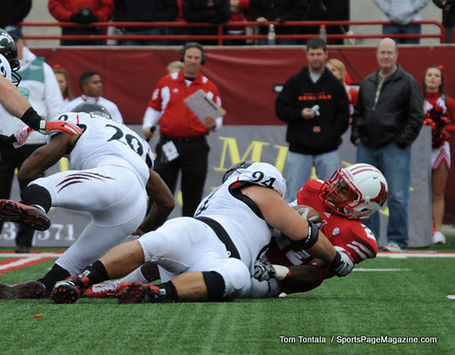 The Football coaches released a post spring depth chart and there isn't much in the way of surprises. The bullet points.

Joe Reedy is continuing to do the possible by making Bill Koch look lazy and hackish with his coverage of the Bearcats draft prospects. This time Reedy checks in with Mel Kiper about why he is so obviously bullish on him. The reason is basic, and why the patriots make a ton of sense for Wolfe. He is scheme versatile and there isn't a team in the NFL that plays more different concepts than the Patriots.

Isaiah Pead is also making a ton of noise moving up draft boards around the league. Kiper is also expecting Isaiah to be the third back off the board, most likely in the third round, which is borderline shocking to me after reading article after article picking his game apart--

Adrien Robinson has become the beneficiary of what some have termed a weak Tight End Draft class. But the supposed weakness or strength of this crop of TE's is dependent largely on how a personnel evaluator views the role of the TE within the confines of the offense.

If the offense of your team requires a TE who can flex out and beat man coverage against a dime back or a linebacker then this is a great draft class. But for those still stuck in the 80's this class does suck. I don't think that there is any doubt that Robinson gets drafted at this point. But how high he goes will depend largely on the preconceived notions a GM will have about the position. For Robinson the more retrograde the better--

The week ahead in Bearcat sports...the Baseball team starts a two game series with Xavier today...lets all get started on previewing this fall's opponents starting with Miami of course...UC commits Kyle Williamson and Zach Edwards have been named to the SOCA East-West All Star game taking place on June the 7th...I don't know if you heard but Chris Mack asked Mark Lyons to be an adult. Lyons said zip it up...meanwhile John L. Smith has been named Arkansas interim coach they only need some Steve Kragthorpe to complete the "Louisville trifecta"....Virginia Tech has interesting timing in firing Seth Greenberg...UConn is imploding rapidly....who knew that drugs were the gateway to economic enlightenment. Drug dealers that's who--