Share All sharing options for: Bearcat Bits for June 11th

No idea why this was buried on a Friday but buried it was. The bullet points. 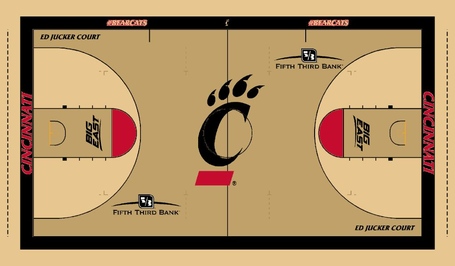 As for the question of Nippert Stadium and/or Fifth Third Arena nothing this year, but Whit Babcock did have this to say.

"We’ve got to continue to look at what we’re going to do with Nippert Stadium," said Babcock. "Right now we’re focusing on studying the west side of the stadium and our options there. We don’t have anything set firmly on that, just working on what options we may have there for new premium seating. I don’t want to put a time frame on it, but hopefully not in the incredibly distant future, we can really do some work to bring the west side of Nippert Stadium up to speed, as well as Fifth Third Arena.

The good news from that being that the West Side of the stadium is back in play for renovations, as well it should be. The most recent rumors of Nippert Expansion (meaning two year old rumors) were focused on the East Side of the Nippert($) which was beyond idiotic. But nothing will happen on that front this year, with good reason. Money to adress either ediface won't be available until the Big East inks its new TV contract. The negotiations won't start until September and a resolution to the issue before the Halloween is unlikely and as such plans for Nippert and/or Fifth Third moving beyond the planning stage before this time next year are remote.

The Bearcats Kathy Clump was the only Bearcat to emerge with All America honors from the the NCAA Track and Field Championships in Des Moines on the campus of Drake University. Her time of 2:03.56 was good for 6th place and First Team All American honors. That time is one of the the hundred fastest in the world for 2012.

For Klump this is the second such honor this year. She was also a first team All American in the 800 at the 2012 NCAA Indoor Championships. The outdoor Championships marked the end of the line for Klump as a Bearcat. She walks away leaving a big mark on the program as a three time All American.

The annual Women's Football Clinic took place last week...photos are available.... video too ...no one who answers to Gronk should be paid this much...it seems that Danny Milligan has challenged Jason Kelce to a beard off. It's a battle he will lose. Jason Kelce's Beard has its own twitter account. Step your game up Danny Milligan's Beard...this really takes the edge off the LeBron James 1,000 yard stare...Mad Men is gone til November but i'll always have this...on The Plains of Alabama thoughts and prayers go out.