An intrepid Bearcat vacationer took a whole bunch of sand and reshaped it into the most perfectly formed thing known to man, the cozy confines of Nippert Stadium 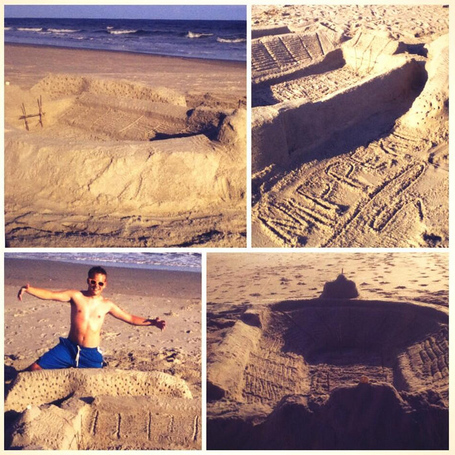 Its all there. The Lindner Center, with individual holes for the windows, just like the real thing. The dieterle vocal arts center caps the horseshoe end of the stadium. The press box is to scale and, if I am not mistaken it is the new pressbox instead of the one that will be taken down at the end of this year.

This is excellent work from Josh Sempsrott, sadly it was not meant to last, as it was swallowed by the sea, as all sandcastles eventually are.

Goal posts and a press box. All that remains of Nippert. The ocean taketh again. pic.twitter.com/1phkdyRJ9l

It is still just August, people are still taking vacations. So if you happen to be going to a place with plentiful beaches and are moved with the desire to create sandcastles of University of Cincinnati landmarks in your spare time, well now you know there is a place for this kind of thing.