The Desolation of Gunner Kiel

Something is happening in the national scene regarding Gunner Kiel and we need to take note of it.

Share All sharing options for: The Desolation of Gunner Kiel

53. Cincinnati
Starter/backup: Gunner Kiel/Jarred Evans
Buzz: The highly touted Kiel began his career at Notre Dame before transferring to Cincinnati and sitting out last season. He is a strong-armed guy who supposedly can make all the throws -- and with accuracy. He also has good mobility, though asking him to throw on the run can lead to some difficulties. Cincinnati has a deep group of receivers, and those receivers should be living large with Kiel throwing the ball. Evans is a JC transfer who will have to hold off sixth-year senior Munchie Legaux, who missed most of last season with a broken leg, for the backup job.

After looking into the details it becomes more clear what is happening. The rankings are based on 1) Coach's Comfort Level; 2) Quarterback-Offense Fit; 3) Starting QB Experience; 4) Backup QB Experience; and 5) Expected Production. Obviously, Cincinnati was hammered on numbers 3 and 4. I'd be curious to see what listing Munchie as the backup would have done to our ranking. Notable teams ranked ahead of UC were; Akron (51), SDSU (45), UTEP (48), Temple (39), Florida Atlantic (36), Bowling Green (26), Houston (25), Louisiana-Lafayette (17), Old Dominion (15), and ECU (5). I mentioned each of those for different reasons of interest for UC fans (You can figure out why). In almost all cases the 'headscratchers' are due to having very experienced starting and/or backup quarterbacks, often in the form of a senior starter. So, I brushed this aside as a ranking system that was simply unfavorable for UC.

Then came this - Gunner Kiel is not one of 39 quarterbacks listed on the 2014 Davey O'Brien National Quarterback Award Watch List. Before you get upset, calm down. The 39 are required to have at least one collegiate snap under their belt. No worries though, appearing on the watch list is not a requirement to win the award. For example, Jameis Winston hadn't taken a snap before last season, but ended up winning the list. I don't expect Gunner to win the award, but he could make the semi-final list of 16 in November. 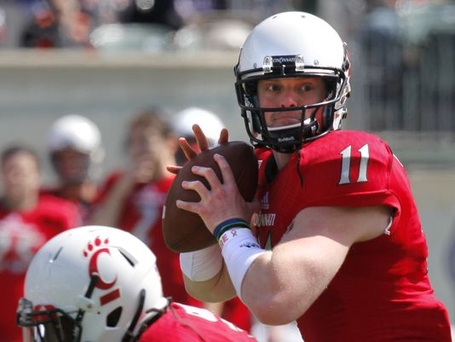 I hope Gunner reads this stuff. I hope these articles are printed out and attached to the inside of his locker. Granted he is somewhat of a victim of circumstance in that simply not having taken a snap has impacting his eligibility or ratings, but most people don't realize that. Almost no one reads the details and the details are hurting Gunner's national reputation.

Performance is the product of ability and motivation. Gunner, a five-star quarterback out of high school, has as much ability as any quarterback out there, and these rankings should have just given him a whole lot of motivation. So, science says that Gunner is going to explode this season. Got to love having science on your side.

Gunner Kiel was a great high school quarterback; however, the verdict is still out regarding how he will perform at the collegiate level. The stars have aligned for a perfect development path for Gunner this year. The Bearcats start out with a highly winnable, but respectable game against Toledo. They then welcome Miami (OH) to Paul Brown. The Miami (OH) game will give Gunner the opportunity to work on anything he struggled with against Toledo. Both of those first two games are at home and against teams with some of the worst QB situations according to the aforementioned NFL.com article. Then comes the first real test against OSU. Let me be clear - I don't expect to beat Ohio State, but a respectable outing will grab national attention. I am a little frustrated that the game is on the Big Ten Network, but what's the point in crying about that?

Gunner has essentially three chances to make a big splash - Ohio State, Miami (FL), and ECU. SMU and Houston are respectable opponents, but Cincinnati should be favored in both of those contests. Maybe I am giving ECU too much respect, but remember... they have the fifth best quarterback situation in the country.