Dick Goist, An All Around Player

Share All sharing options for: Dick Goist, An All Around Player

When we talk about the Sid Gilman era here at the University of Cincinnati we tend to focus on the things that Gillman was known for. His intricate and complex passing schemes that linked the drop of the quarterback with the routes being run by the receiver which changed, forever, the nature of offensive Football. While that is what Gillman is known for yoday, he wasn't the Mike Leach of his era. He still had a balanced attack, he still made a commitment to running the Football.

One of his biggest stars in the running game was Dick Goist. In that era it was always a running back by committee approach so Goist never compiled the kind of massive stats needed to stand the test of time. In fact Goist only led the team in rushing for a single year. In 1953 Goist rushed for 561 yards and 7 TD's on just 64 carries. But Goist averaged 8.7 yards per carry that year, and that number still sits atop the single season charts, and likely will never be touched. Goist actually holds two of the top 10 spots for yards per rush in the Bearcat. Annals.

The 1953 season was unquestionably Goist's finest wearing the Red and Black. In a match up with William and Mary he broke an 80 yard scoring run against the Tribe. Later in the year he posted 116 yards in a 66-0 pasting of Case Western Reserve. He also played defense and punted 21 times for 752 yards, an average of 35.8 yards per kick. His breakout year earned him All America plaudits.

Goist's performance in 53' earned the trust of Gillman has he made Goist the sole captain of the 1954 squad. Goist had another strong year. He averaged 6.07 yards per carry in that season and was named an honorable mention All American for a second time. In Goist's four years at UC the Bearcats went 35-5-1 and they went 6-2 in UC's main rivalry games against Xaver and Miami. 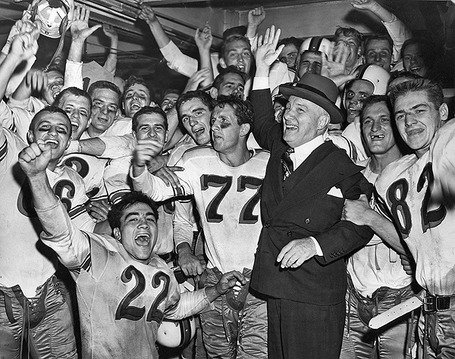 After his Bearcat Career Goist was taken with the 11th pick, 144th overall, in the 12th round of the NFL draft by the Detroit Lions. Though he was drafted by the Lions he never played in a regular season game.