Gene Rossi and the Move That Shook The Victory Bell

Share All sharing options for: Gene Rossi and the Move That Shook The Victory Bell

The University of Cincinnati and Miami University have met on the field of play 112 times. For roughly the first 60 of those games the only real sense of rivalry was strictly geographic in nature. The schools are located just 31 miles apart and though they had met on the field numerous times, and were even members of the same conference on multiple occasions. But the match ups lacked a certain spice, the sweet spice of hatred. UC was much more engrossed in its crosstown rivalry with the boys of Xavier, even though the match ups were intermittent in those days and Miami, well Miami was a sleepy little University in a sleepy little town. So that much hasn't changed.

In 1949 that all stated to change. The seeds of discontent were scattered when the Redskins lost their charismatic and innovative head coach, but not to the Bearcats. Sid Gillman took over the Redskins program in 1944 as 32 year old first year head man. He had worked his way up through the coaching ranks as an assistant, first at Denison and then at his Alma Mater, Ohio State, under a certain Paul E. Brown before taking the Miami job in 44. Gilman, as would almost always be the case, set the world (or the world surrounding Oxford, which is really more like a moon or Pluto) alight. Miami went 8-1 that first year. Gilman continued to rack up the wins 7, 7 and 9 in 45 through 47. Then, as abruptly as he arrived Gilman departed Oxford. Not only did he leave, he left to be an assistant. Granted it was at Army for Earl Blaik for a coach and a program at the absolute peak of their respective powers. Gillman was at Army for one year, 1948. After that '48 season Gillman took the head coaching job at Cincinnati, despite promising to return to Miami to coach the Redskins once more.

Gillman alone was not the biggest reason for the animosity between the two schools. Gillman came to Hamilton County to assemble his staff, and what a staff he assembled, mainly by poaching his former colleagues from Miami. George Blackburn, his successor at Miami jumped on board along with former Redskin All-American Paul Dietzel. Taking coaches is one thing, even back then it was just a part of the profession, but poaching players is a whole other matter. That's what really added that little pinch of hate to the Rivalry.

Gillman and Blackburn persuaded three former Redskins to come down to Clifton and play for the Bearcats. Those three players were Joe Madro, Dan McKeever and Gene Rossi. Those defections turned the volume of the Bell up quite a bit. Gillman using Rossi to devastating effect against Miami in the 1950 season turned it to 11. 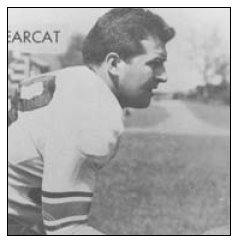 Rossi was twice named an Honorable Mention All-American in his career and his record during his eligibility at UC was 25-9, which was a three year run that wasn't equaled in the annals of the program until this current era. Rossi's name still dots the passing records at UC to this very day. Needless to say the days of Gene Rossi truly were great days to be a Bearcat.