Share All sharing options for: Jack Lee; A Shining Star In Darkening Times

In 1954 Sid Gillman abruptly left the UC program to take over the head coaching position for the Los Angeles Rams. The move left the city in a stunned silence and the program was left in a lurch. UC wound up hiring George "Blackie" Blackburn off Gillman's stellar staff. Blackburn performed a similar role at Miami when Gillman left for a job at Army.

What Blackburn didn't know at the time was that UC was about to get the hammer dropped on it by the NCAA for recruiting violations. In 1955 the Bearcats were on probation and they struggled to a disasterous 1-6-2 mark. That one win came by a single point against a bad Marquette team. Blackburn slowly built things back up and in 1957 he found himself a quarterback in the form of Jack Lee.

Blackburn found his new QB just as the Bearcats were entering a new conference. UC Joined the Missouri Valley conference in 1957 and while the team didn't dominate from the onset like they did when they joined the MAC Lee was a consistant bright spot.

He led the Bearcats in passing for three straight years, topping it off with a 1,500 yard passing year in 1959. In that 59 season he put together two monster passing games in back to back weeks. First he lit up Tulsa for 282 yards and then he followed that up a week later with 275 passing yards in a match up with Marquette. Unfortunately for Lee, those efforts weren't quite enough. UC lost both contests by a combined 8 points. For his trouble Lee receiver the Claude Rost Award as the teams MVP in 1959 and he was named All Conference in 1958 and 59.

But at least he never lost to Xavier 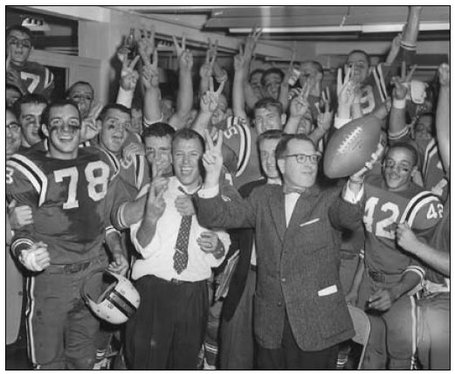