Share All sharing options for: Cincinnati Bearcats Football; Creating A Brand Courtesy of Winning and Adidas 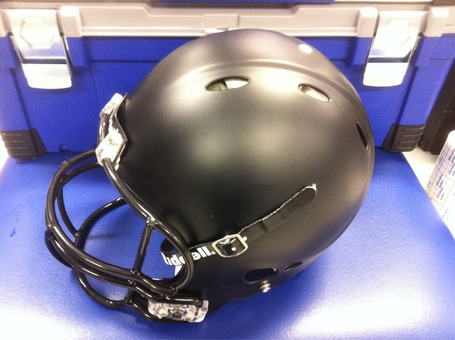 It was fun to watch the aftermath of yesterdays uniform related news develop within the confines of Bearcat Nation. For the most part everyone could get behind the initiative. But there is a small but vocal group of Bearcat fans who were up in arms on twitter and message boards and one occasion, in my inbox.

The notion being that the Bearcats have been identified and personified with the black helmet with the white and red C-Paw logo and that should not be changed in any way because it will "damage the brand." People are entitled to their opinions, but it is wrong to assume that a team like UC should never change anything about their look under any circumstances. While that approach would undoubtedly appeal to Paul Lukas, its not a very smart way to develop a brand, at least not for UC.

If you are an Alabama or a Michigan or Notre Dame that is certainly a smarter way to go about building a brand. Or more accurately maintain a brand. Schools of that ilk have a natural, built in cache, courtesy of years of performance at the highest level. They don't have to build anything, merely maintain.

That is not the case for UC. The Bearcats have been playing Football forever, but have had few periods of national relevancy. But they have all been very brief, and rarely lasting more than a recruiting cycle.

The Bearcats don't have a brand, or they didn't. But the last 5 years is easily the most successful run in school history and Butch Jones, (and Brian Kelly before him) have really gone all in capitalizing and starting to create a national brand for the Bearcats. The new helmets and rumored, though not confirmed, new helmet decal that will adorn the flat black helmets are just part of that.

The bottom line is that University of Cincinnati Football is still underground. Outside of Cincinnati very few people know about Bearcats Football. Hell inside Cincinnati, insular and slightly backwards as it can be, there are lots of people who count themselves as football fans but know nothing about the program.

That is what the Bearcats are trying to fight. And if trying something new for a one off situation (like a nationally televised Bowl Game) can accomplish that why not go for it. The notion that a team has to wear the same thing every game to be recognized is outdated in the era of 24/7 social media saturation is ridiculous. Maryland damn near crashed twitter when they decided to wear this in a game. The Bearcats are building a brand and the only way to do that it is to go outside the lines and push things a little bit. And it certainly helps that Adidas needs someone in their roster of Universities who is willing to push the boundaries. The Bearcats can be that school for the three stripes, and that would obviously be beneficial to all parties. Hopefully this Bowl Game is just the start.