The Cincinnati Bearcats Success in 2011 Is All On The Line

Share All sharing options for: The Cincinnati Bearcats Success in 2011 Is All On The Line 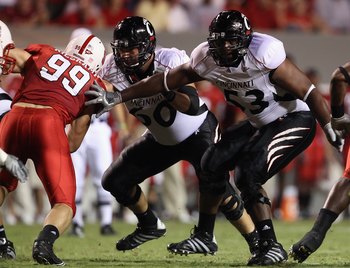 The release of the depth chart for the Austin Peay has provoked a reaction from the vast majority of Bearcat Nation. For the most part it has been positive, I think people are just ready for non Mike Brown Affiliated Football again. But there is, as ever, a loud and relatively misinformed group that are already seeing the seeds for coming doom in the depth chart. For this group the concern is that the offensive line is going to be as bad as last years (unlikely) and that the defense is going to be worse. (even more unlikely)

I am not really going to hit on the defense in this particular post. Every point that I want to make about the group as whole heading into the season has already been made, in much more emphatic fashion by Matt Hinton. The gist? That the 2010 defense was actually better than the 2009 defense by most statistical measures. The main exception being turnover margin, thanks to a staggering 29 giveaways. There is no reason at all to think that this defense isn't going to make a big leap forward this year. If you disagree with that assertion, you are more than welcome to craft a lovely fan post explaining why I am an idiot.

Instead this post is all about the Offensive Line, and why they got a bad rap last season.

Let's start with the obvious. The offensive line that took the field for the first three games of the 2010 was one of the worst O-Lines in recent Bearcats history. There is no getting around it. Everyone seemed to be playing out of position (cough * C.J. Cobb * cough) and some of the guys who were playing shouldn't have been playing at all (cough * Evan Davis * cough). The end results from the chronic mismanagement of offensive line personnel wasn't exactly pretty.

That's the offensive line that everyone remembers and that's what everyone is projecting onto this group, and that's unfair for a couple of reasons. The first and arguably most important of the bunch is that the group that finished the season last year had very little in common with the one that started it. Reading the various pre season publications the same point gets thrown out again and again, that UC loses three starters on the line. According to the participation chart that is true. But it overlooks something, namely that the fact that Cobb started all 12 games last year is bound to be one of the great unsolved mysteries of our time. For me, simply knowing that C.J. won't be playing this year makes me more optimistic about the group as a whole. That's nothing personal against C.J., it's just that every time I watched him closely he looked out of his depth.

The other reason that I am more bullish on the offensive line than most of my contemporaries is that UC's offensive line was actually decent during the last 8 games of the season. Not great mind you, but not hide the women and children bad, which seems to be how everyone is remembering the line from last season. Here are the numbers from the first three games compared with the last nine. (note the first two columns are per game averages)

As the saying goes numbers devoid of context are without value. So here is a table of how the offensive lines from 2005 through 2009 fared on these same metrics.

Now there are all sorts of caveats to these numbers starting with the skill sets of the various QB's who helmed the offenses. For instance dual threat QB's generally take sacks at a much lower clip than a tradition pocket bound QB does. The other factor is the pro style vs spread offensive types. The very nature of pro style offenses, particularly the Don Treadwell iteration, means two TE sets, fullbacks and generally power Football. Defenses counter by packing the box with 8 and 9 defenders which obviously increases the likelihood of any one defender making a negative play.

But the general point, that over the course of the season the Offensive Line developed from an abject failure. A line so bad that UC couldn't even run an offense, but rather which just kind of ran plays. To one that at the end of the year was if not a minor strength than to something that at least was no longer a going concern. I still have major questions about Evan Davis, I don't think he is long to start in this world for very long. But there options to replace Davis, and I am perfectly fine with this group as a whole, and you should be too.