Alternate Title: All These guys do is catch touchdowns.

Last year I think it is fair to say that Butch Jones and Mike Bajakian under utilized the tight ends in 2010. Ben Guidugli and Adrien Robinson combined for 30 catches for 262 yards and 3 TD's. In 2009 Guidugli had 27 catches for 364 yards and 3 TD's himself. The talent was still there last year, but Jones and Bajakian weren't accustomed to having receiving threats as tight ends at Central Michigan. Correspondingly they had a hard time getting them touches.

This year Jones and Bajakian were well acquainted with the skills of Robinson, Travis Kelce and Blake Annen and really made an effort to get those guys involved in the offense, and not just with the passing game but in the running game as well. UC used a lot of two TE sets this year, far more than they did in 2010 and the ability of Kelce and Robinson in particular to seal the edge showed up time and again this season. George Winn's run in the Liberty Bowl is a perfect example of what those two guys did for the running game.

But this is not 1975 so TE's aren't judged by their blocking alone. Production in the passing game is how tight ends are ultimately judged. In terms of catches and yards the production of the 2011 TE's pails in comparison to some previous groups, particularly the 2009 group of Gudigli, Kazeem Alli and Robinson,* but passing on the whole was way down in 2011. 70 fewer attempts than QB's averaged from 2007 through 2010 means fewer available balls to be caught. For the TE's as a group a far more relevant statistic is how big a percentage of the offense were the TE's?

The most striking thing is obviously the Touchdown percentage but with the receivers struggling so much with their overall consistency it should be that much of a surprise. Just take a look once more at the targeting chart for the 2011 season** 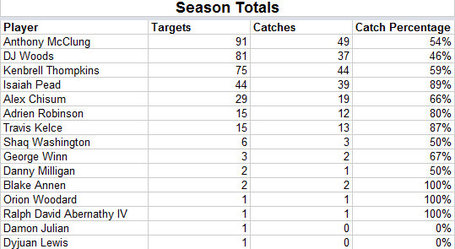 ** Just a reminder that the complete 2011 targeting spreadsheet is available for your viewing/nerding out pleasure here.

The Tight Ends caught 85 per cent of the passes thrown their way which is a high rate for a position group, even one that gets fewer targets in general.

The last topic of this post is this groups ability to convert in pressure situations such as third downs and red zone. The first thing that jumped out at me when looking at the situational stats is the first downs. Of the 27 catches made by TE's this year 16 of them went for first downs which is a 60 per cent conversion, which is pretty good. For references sake RB's*** produced 12 first downs out of 42 catches (28 per cent) and the receivers produced 87 first downs on 154 catches, good for 56 per cent. If you want to know what per centage of targets resulted in first downs for each position group, and really who doesn't, the breakdown is as follows. TE's 50%, WR's 30% and RB's 25%

Compared to previous groups this years TE's statistics don't really match up. This was the first time since 2007 that the group combined for fewer than 30 catches and the second time in five years that they have accounted for fewer than 400 yards. But those numbers don't tell the whole story because in the context of the offense this was the best group since 2009.


I Was Right On This One

In my pre season preview of the Tight Ends I gave the group an 8 and had this to say.

There is enough talent here to make the TE a big part of the offense. The three man rotation is solid and I will be disappointed if the staff can't find a way to work these guys into the gameplan.

The coaches certainly found a way to make the group a part of the gameplan and the group responded big time. Post season I give the TE's a 9 for generally being more consistent than the wide receivers and being assets on third downs and in the red zone.