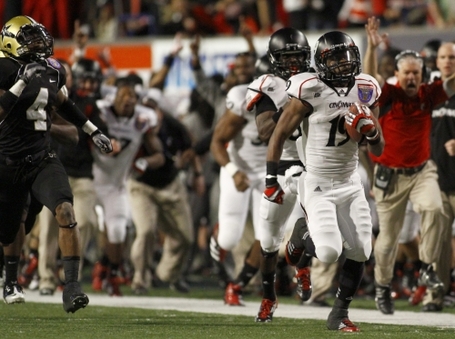 When Bearcat fans are asked about the Brian Kelly era the mind jumps to the offense first and foremost. That isn't unreasonable or particularly unexpected. The litany of stars on that side of the ball is well known. Ben Mauk, Tony Pike, Dominick Goodman, Mardy Gilyard etc. Often overlooked when discussing those teams were Kevin Huber, Mike Windt, Jake Rogers and Charlie Howard, the core of the special teams on those teams. There are three phases to the game, Offense, Defense and Special Teams. Kelly's teams were known for the offense but won many a game with special teams.

This seasons special teams didn't win many games but were are real strength throughout the season and what's more got progressively better as the season wore on. See how they stack up to the average of the four previous seasons.

*Phil Steele compiles an aggregate special teams rating combining all of the above factors into one number and then sorting everyone by that number. The Bearcats had the best special teams in the country according to Steele in 2008 and the #8 group in 2009.

As you can see the only area where the 2011 special teams could properly be called a disappointment was in the punt return game which was always an adventure. And it wasn't just one person, Isaiah Pead, D.J. Woods and Danny Milligan all had a hand at returning punts. Pead was excellent in limited opportunities, but he also had a nearly catastrophic muff against Vanderbilt.

The breakout player on special teams in the 2011 season was Ralph Abernathy IV. The quarkback had the return job from day one and isn't likely to give it up before he graduates. Like all freshman he was inconsistent all year long but every once in a while he would put it together for a big return. He finally broke through and got a touchdown in the Liberty Bowl

Much more where that came from.

I thought for a while there that Kevin Huber was a once a decade kind of player. A punter who is a difference maker. As it turns out those kind of guys are becoming a bit more common at UC because Pat O'Donnell was a weapon this year. He averaged 43.81 yards per punt which was good for 17th in the country and 1st in the Big East. He also unleashed a 76 yarder against N.C. State.

Sound In The Kicking Game

I was really impressed with the way Tony Miliano kicker this year. His freshman year was better than that of last years kicker Jake Rogers. Miliano doesn't really have the big leg or range of Rogers but his week to week consistency is better. The biggest thing he needs to work on for next year? Getting more height off the ground on his kicks. He had 6 kicks blocked on the year, almost all of them off pressure straight up the middle. It was a good year for Miliano but there is room for improvement.

Orion Woodard And Other Coverage

quietly, very quietly the Bearcats developed into one of the best kickoff coverage teams in the country. A big reason for that was the play of Orion Woodard. Woodard wound up finishing 15 on the team in tackles with 25. Not a bad tally for a guy who plays 8 a game with the chance to make a tackle. But it wasn't just Woodard everyone brought the thunder on kickoff. Ask Steven Clarke.

For the post season my rating of the special teams is an 8. This was a solid effort, but the group as a whole is capable of more and will have high expectations next year.

Give your rating and drop your comments about the phrase O'Donis and other special teams related things down below.