Walter Stewart is not, officially, done for the year. But very few observers expect to see Walt again, but he is still on the depth chart, one of many unexpected surprises therein.

Walter Stewart is almost surely done for the year, and is certainly out for tonight, but he is still listed on the depth chart as a starter, or co-starter with Brandon Mills. No idea what Butch is playing at with that. But that is really the only shocking thing from the depth chart, at least on the defensive side of the ball where everything is back to normal, other than Walt.

Moving to the offensive side of the ball Sean Hooey is still out, though he is listed as a co-starter at right tackle with Parker Ehringer. Ehringer has started the last four games at RT, and the previous one at right guard, and has been nearly flawless for a rookie.

There is some drama at the receiver spots. Danny Milligan continues his breakout senior season, and is battling Anthony McClung for plying time. Outside, Alex Chisum and Damon Julian do battle. It appears that "The Catch II" has lit a fire under Alex Chisum. After posting just one catch in the first four games of the season Chis has had 4 catches, for 80 yards in the last two games, and is reminding everyone why we fell in love with his potential in the first place.

Lastly Tion Green has cracked the two deep for the Bearcats at running back. Moving one spot ahead of Jameel Poteat. That means that Green is almost certain to get his first non garbage time reps and, perhaps, his first carry as well tonight. That isn't a huge development for tonight, but projecting forward to next year its big. 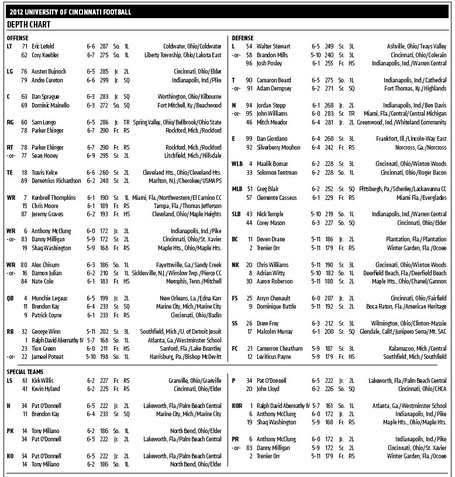