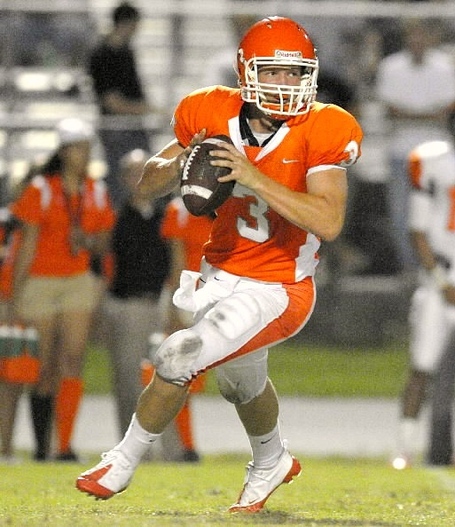 One thing is certain. Butch Jones loves competition at the Quarterback position. He has taken two quarterbacks in each of his first three recruiting classes. First it was Munchie Legaux and Cody Kater in the 2010 class. In the class of 2011 it was Patrick Coyne and Stephen Weatherford and last year it was Bennie Coney and Trenton Norvell. Now with Orlando Boone QB Alton Meeks joining Massillon signal caller Kyle Kempt the tradition continues.

Meeks is a guy who is a major athlete. He is a massive QB by any standard standing 6'2" 225. His size is what makes his recruitment interesting. Meeks is similar to Patrick Coyne in that he looks like a linebacker playing QB. That is a great thing in an offense that asks the quarterback to be the power runner.

Meeks had a great offer sheet. Florida State, Michigan State, N.C. State and South Florida were among the schools to offer. Quite a few of his offers were as a Linebacker, Florida State in particular. There is no denying that Meeks has some issues to iron out as a passer included but not limited to his footwork and mechanics. But the potential is immense. Highlights after the jump.

So what do you think of the pick up?