Bearcat Bits for May 4th

Share All sharing options for: Bearcat Bits for May 4th 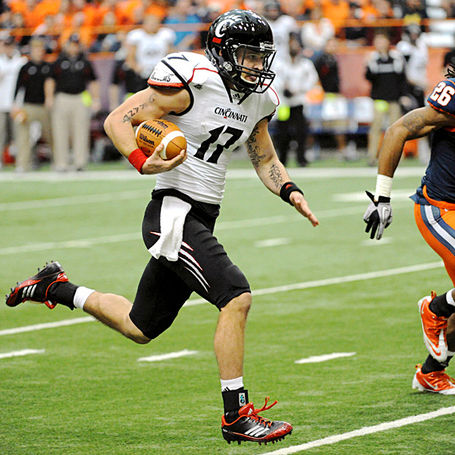 Getting this started much later in the day than usual, none the less here we go.

One of the biggest questions I have about the Bearcats offense this year is a simple one. What is Mike Bajakian going to do with Jordan Luallen? The answer might just be everything. Luallen is now officially a slot receiver, and a massive one at that, but he won't just be a receiver. He will play at running back and quarterback and anywhere else they can think to get him on the field. If you want a precedent for how I think Luallen will be used I'd take a good look at Trey Burton and how he was used by the Florida Gators in 2010. I think Luallen can do some of the same things and can be a game planning nightmare. UC won't have more than a handful of plays for Luallen but the amount of time opposing staffs will have to devote to dealing with him is almost worth its weight in gold.

My, and I am guessing everyone elses, favorite Bearcat is on the grind again. Kila is back in the gym working on his handle getting ready for next season. Dan Hoard caught up with him and SK put the final nail in the coffin about him leaving early. He is loving his experience and his time with the Bearcats that he doesn't want to leave, possibly ever, definitely not now. There is little doubt that SK will play in the NBA at some point, but he is in no rush to join his best friend Lance Stephenson in the league. I for one am a little bit relieved.

The crowds reaction to the Witty hit never gets old. It seemed that everyone knew someones sternum got broken

Isaiah Pead recaps his draft weekend...track and field heads to Tampa for the Big East Outdoor Championships...Andrea Malek was named All Big East in Golf. Congrats to the Sophomore...Kerry Coombs is enjoying his time in Columbus. My hunch is that he will enjoy it much less when OSU fans realize how bad he is at coaching defensive backs...Bearcats Nation asks a patently ridiculous question...UCLA is almost finished with their renovation of Pauley Pavillion...Pep Guardiola is stepping down from the coaching job at my team, Barcelona. Soccer is poorer for it.