Game notes for tomorrow's contest are out.

--All summer long, the refrain was constant. Jordan Stepp and Camaron Beard are entrenched as starters. They are the starters. They are the future. And they were, for a game. This week, they are not. Adam Dempsy and John Williams move into the starting roles this week with the Bearcats. The change is simultaneously not a big deal, and a big deal. Its not a big deal because each guys share of snaps won't change. All four played around 30 snaps against Pitt, and the distribution of snaps won't be changing at all. But it is a big deal because anytime you change starters it means, something...

--The "-OR-" has been removed from the right guard position. Its Sam Longo's now.

-- Ralph Abernathy is completely absent from the punt return depth chart again. I eagerly anticipate his inclusion. The new kickoff rules have served to take the edge of his greatest threat.

As ever complete chart is available in JPEG fashion after the jump. 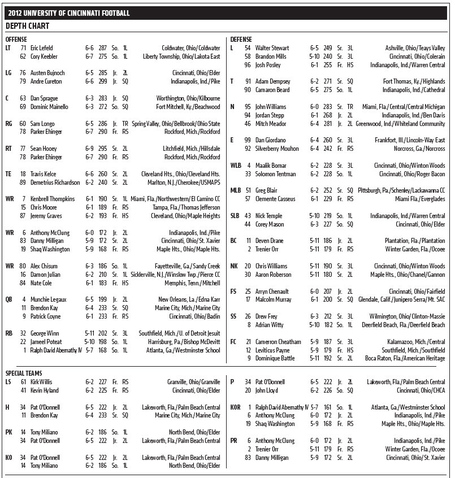