Big dave was a smaller part of the rotation in his senior season than he was as a junior. But he was more efficient in smaller doses and came up big in spots where Justin Jackson was out with injury or foul trouble.

Share All sharing options for: David Nyarsuk's Season In Review

It was clear from the very start of the year that David Nyarsuk's role was going to be lessened compared to 2012-13. The stats bear all that out as Big Dave's numbers fell in every category from a year ago. The decision to limit his role in the team was one that Mick Cronin made early on, with the goal being the betterment of the team. Its would be easy to think that it was his offense that kept him off the floor, but that's not it.

Being 7'1" and shooting 75% at the rim commands a certain amount of attention from a defense no matter what. His offensive game was limited, but its not like Mick has had any qualms about finding minutes for marginal offensive players in the past. 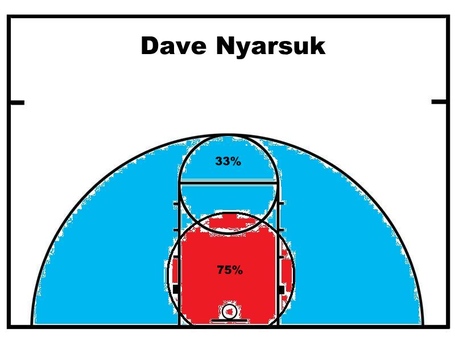 It wasn't Big Dave's offense that kept him out of the fray, it was his defense. That's an odd statement considering who the coach of this team is, and the effect a player of Dave's size can have on an offense, but its true. What made the Bearcats so good on that end of the floor for most of the year was the ability to switch every screen one through five. Big Dave simply didn't have the defensive mobility necessary to thrive in that scheme against high level competition. When Nyarsuk did play big minutes the Bearcats almost always went with the 2-3 zone with him under the bucket.

Without question Dave's best game of the season came against Temple in Philadelphia. When Justin Jackson went down with an injury early on against the Owls it was an open question as to how Mick Cronin would cobble together a front line with JJ out for the game and Jermaine Lawrence still out with turf toe.

They did it by going to a zone with Titus Rubles, Big Dave and Jermaine Sanders manning the back line. Big dave logged 20 minutes, the most run he had since the Iowa State game the year before. He put up 4 points, grabbed three rebounds, blocked a couple of shots and just generally gave the Bearcats great minutes in preventing what would have been an embarrassing loss.