The 2013-14 season was the Lexington native's first full season as a starter, and Guyn proved to be one of the more divisive figures on a team that was generally beloved by Bearcat fans of every spectrum. The question is why.

Share All sharing options for: Ge`Lawn Guyn Season In Review

One of the most frequent topics of discussion this season was the Ge`Lawn Guyn vs. Troy Caupain debate. With Justin Jackson making the final transition from headache inducing wildcard to a force for good we all needed debate fodder. The point guard position became the battleground, and Guyn was cast as the new Justin Jackson. But it wasn't supposed to be like that.

As a freshman Guyn vied with the departed Jeremiah Davis III for the right to be the backup for Cashmere Wright. That job became Guyn's last year when Davis sat for all but four games. With Cashmere Wright gone Guyn got first crack at running the show this year, and if I am honest he didn't do much with it. Guyn was not much of an offensive player in either of his first two seasons, posting well below average offensive ratings as a freshman (90.9) and sophomore (95) but he took a step back this season posting an offensive rating of 89.6, second worst among rotational players this year*.

*A penny if you can guess who was number 1 in the comments.

It wasn't one thing that held Guyn back this year, it was a little bit of everything. He has never really been a great shooter, but he has had moments in the past, and he did this year as well. During a six game stretch from the visit to USF to the return game at UC he shot 47 percent from deep. Outside of that stretch he shot 27 percent from deep. In general Guyn's shot chart for the year was downright icy. 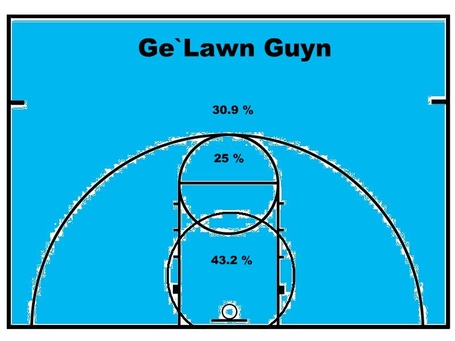 There is no sugarcoating that sea of blue. Guyn's shoulder injury had an impact on his shot this year, that is beyond a doubt. But G wasn't much of a shooter in the seasons before this either. It is possible to be a functioning point guard without being much of a shooter (see: Rubio, Ricky). But being a threat to shoot makes creating offense generally easier, and it seemed like every possession was a grind with Guyn.

It can't be said that all of the offensive struggles should be put on the head of G. As a player he wound up being, more or less, the player he was in years one and two, just playing more minutes. Mick is as much to blame for the offensive struggles of the team this year as anyone. He gambled that Guyn's extensive defensive ability would be able to offset his offensive deficiencies. For the year that gamble payed off, with 27 wins and a conference title, but when it backfired all the world's tires ignited at once in a staggering display of offensive futility.

Guyn's finest performance of the season was without a doubt the first UConn game. For the game he scored 7 points, grabbed a season high five rebounds, dished out four assists (also a season high), picked up a pair of steals and a block while turning the ball over just once in a season high 28 minutes. That game is by far his best as a Bearcat.

Mick Cronin is a smart guy who is very much a low key analytics nerd. With that in mind I just don't see how Ge`Lawn Guyn will manage to hold onto the job as the starting point guard with Troy Caupain still on this team next year. No matter what perspective you use, be it the eye test or analytics the verdict is the same, Caupain is the better point guard for this team. However that doesn't mean that Guyn will be without a role next year.

He will play because he is the most proven* perimeter defender that the Bearcats have. We have 99 games of evidence that he is a top notch on ball defender, and that will always be needed on a Mick Cronin coached team. But G needs to develop something for the offensive end or it is going to be hard for him to get minutes.

* Deshaun Morman has better tools and could be better in time, but that is still just a projection, and I don't expect him to come out the box locking down the oppositions best player.

For someone with such a spotty record of shooting in general Guyn is actually decent in catch and shoot situations. For his career well over 90% of his three point makes have come on catch and shoot opportunities. Where he gets into trouble is when he tries to create his own shot off the bounce. As much as he might have thought this to be true G is not Cashmere Wright reincarnate. Cash was a guy who shot seemingly nothing but pull up jumpers and managed to be a 35 percent career three point shooter, that is not G's skill set.

As discussed previously there are limitations to the stats available for college basketball, and that really gets hammered home with G. Because all the stats say that there is very little redeeming to the offensive game of Ge`Lawn Guyn. But I don't believe that myself. I would wager moderately that Guyn is at least 10 percentage points better in catch and shoot opportunities from deep than he is off the bounce. I can't prove that with the stats available to me, but that is near the truth of it. There is no place for a 30 percent three point shooter, but there is always a place for a guy who hits 40 percent from deep.

That's why I think Guyn's role for the Cincinnati Bearcats in 2014-15 has to be as a defensive stopper on the perimeter and as a catch and shoot three point specialist on offense. I don't expect him to go to work over the summer and come back as Lauent Rivard, but I don't see how he can have a role on next years team if he doesn't bring something to the table offensively. G has the tools to thrive in that role, he just has to be willing to accept it and go to work.