With most of the team shaping up for next year, it still isn't time to start talking about expectations... but I am going to anyway because I just can't wait that long. So we begin the journey with the first entry in a series of posts about expectations for each player next season.

Last season was like a good dream that you didn't want to end. Then it did... abruptly. Next year is special because the bearcats have something they haven't had in a long time - potential. Along with this potential comes expectations, so lets talk about them. Perhaps the epitome of potential is Shaquille Thomas, so I will start with him... 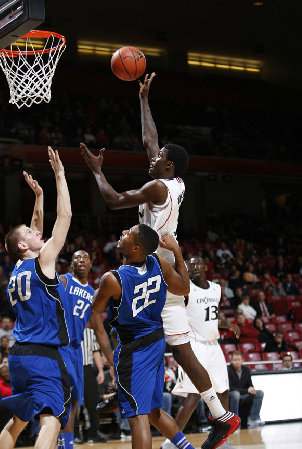 Shaquille Thomas - How much potential does Shaq have? Basketball is in his blood. Many of you know this, but he is nephew to former NBA player Tim Thomas and half-brother to WNBA standout Essence Carson.

I know we've been through this before, but sooner or later someone is going to help Shaq realize how good of a player he is. The Paterson, New Jersey native needs to be our go-to-guy next season. ESPN sees a breakout season for him, and so do I.

Ok. Yes, Shaq has a nice pull up jump shot that he can knock down with moderate consistency (See this article for shot chart). It is time to move past that. Growing up I didn't shoot the ball much. My teammates literally called me "scared to shoot". Shaq sometimes seems like he is trying to steal the nickname that I worked so hard for. Well, he can't have it.

Night in and night out I want to see Shaq catch the ball, turn to the rim, and dunk on defenders. We have seen him do it and it fills us with a sense of frustrating optimism. Almost every game last year and I would honestly forget about Shaq. I'd think get it to JJ in the post or set it up with SK. Then Shaq would get a tip slam and I would be reminded of the NBA level talent we have that is for some reason content with passing.

Let me make my point - Shaq was the fourth leading scorer on the Bearcats squad last year at 6.8 per game. Did you know that Shaq scored less than Titus? Now, I loved Titus for all that he was. He was the engine of that team. A rebounder. An energy guy. But a scorer he was not.

What he should keep - Shaq has a nice mid-rang jump shot. His release is nice and high, making it very difficult to defend. His release has to be somewhere around 9-10 feet high. I saw Shaq walking with KJ, Troy, and Jermaine Sanders last week and I noticed how the group was focused toward Shaq. When you look at a group of people, you can often tell who the leader or most respected person is, and in this case it was clearly Mr. Thomas. He has an opportunity to become the leader of this team, which is nice since we could use his leadership for a couple of years.

What he should improve - Aggressiveness. This is UC basketball. 3-5 layups or dunks a game would be a good pace for Shaq. If he does become more aggressive though, the 66% free throw shooting has to change. Now, that is better than two years ago when he was living up to his name (Shaq) and shooting a dismal 48%, but if he can get that to mid-to-high 70s, Shaq will be a dominant threat in the AAC.

Basketball isn't about being great at everything, it is having a skill set that compliments on itself. Like a pitcher having a solid fast ball paired with a sneaky change up. If Shaq can develop his drive game, then defenders will have to lay off him and he can drill that 15-footer that he loves so much. When they tighten up their D on his jumper, he can blow past them. When blows past them, he is going to get fouled making his free throw shooting critical.

To get down to it, I would like to see 14 points a night, 5 rebounds, and 3 assists. We don't need him to be SK at 20+ per game, though Shaq averaged 28 points per night in high school. This team will be able to score by committee, but Shaq needs to be the guy we give the ball when we need a basket. Once Shaq establishes himself as the dribble-drive master of the AAC, teams are going to adjust by having off-ball defenders help. That is where my next posts come in with Jermaine Sanders, Ge'Lawn Guyn, and Farad Cobb.