With the NBA draft hours away, let's take a look at where Sean Kilpatrick stands with his Draft Stock and overall professional profile.

Since we last took a look at Sean Kilpatrick's draft stock, exactly 80% (56/70) of you believed SK was headed to one NBA team or another. Since then, his draft stock has steadily been on the rise and he has crept in to more and more mock drafts. Maybe my biased optimism is getting the best of me, but at this point I expect to hear his name called tonight. Late tonight... but I still expect to hear his name called.

ESPN has SK ranked as the 19th best Shooting Guard in the draft and 79th overall. A total of 60 players will be drafted tonight. ESPN's big issues with SK is that he is too old and isn't defensive minded enough. Kilpatrick has been trying to spin the age as a positive, suggesting that it shows he is mature, and he often points to the maturity of successful NBA teams like the Spurs and Pacers.

I get the age, but the defense thing really bothers me. UC ranked eighth in the country last year in defensive efficiency. In fact, in SK's four years playing for Cincinnati, the Bearcats have never ranked less than 22nd in the country in defensive efficiency. How good is Cincinnati defense? The Bearcats were asked to make a DVD about defense!! As for Kilpatrick, he gave up 0.781 points per possession, which clocks him in in the top 75% in the country. So yeah, I have trouble agreeing that his defense is an issue. I mean look at that tenacious-D... 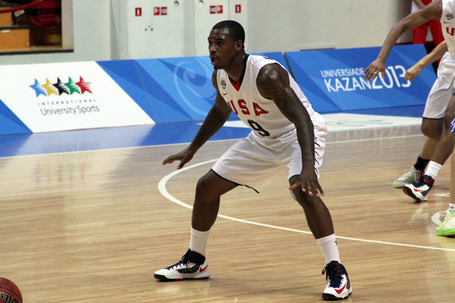 The 2nd team consensus All-American has been undervalued his entire career. He can't dribble. He's not athletic enough. He's too old. I can usually understand why analysts predict a bust from a player making the move from the NCAA to the NBA. In this case I'm a little puzzled. SK was the Bearcat's offense last year. Teams game planned for him, double-teamed him, and tried to force him to give up the ball on every possession. In fact, SK had the highest usage rate of any of the top shooting guards in the country (Link). I wish Sean all the success in the world, but unless he blow his expectations out of the water, I think he is safe from double-teams and game planning in the NBA. SK will benefit from better looks at the basket and his stats will show it.

When comparing players entered in the draft entirely on their college ability and performance, SK is one of the best in the country (8th best in some analyst's opinion). Unfortunately, being good in the NCAA doesn't always translate to the NBA. Some analysts, such as those at ESPN, have Kilpatrick going undrafted. In that case, SK would have to work his way up through the D-League or gain some reps overseas before making the jump to the NBA. That would be difficult, but it has been done. But let's look at the rumors of where he might actually go NBA wise. Not because it is the most likely scenario, but because that would be a lot more fun than talking about the Italian or Spanish leagues.

SK worked out for the Milwaukee Bucks on Friday, June 20th. Admittedly, I didn't see the Bucks play that much this year. There seems to be a lot of uncertainty in Milwaukee, so perhaps bringing in a player with a long track record like SK will add some stability and consistency to the Bucks roster. The Bucks currently own the 48th overall pick, which I think would be a stretch for SK, but who knows. Here's what the Buck's fans are saying about Kilpatrick.

In a good read from HoopsHabit, Nathan Giese could see SK as an Indiana Pacer (as a Lance replacement) or a San Antonio Spur (as a Manu replacement). I already pushed for the Pacers and more support for this has come of late. The IndyStar sees SK as potentially filling a need at Shooting Guard. Lance Stevenson or Evan Turner are expected to leave, and SK can fill the void.

As for the Spurs, HoopsHabit isn't the only one on that bandwagon. In their most recent Mock Draft, Draft Express has SK as the 58th pick for the San Antonio Spurs. Apparently SK's workouts have been going well, because his draft stock has been on the rise. Not to discredit how hard he has been working, but in my opinion this is more due to his laughably low initial draft stock than his recent hard work. Don't take my word for it, here's what Sport's Illustrated's Seth Davis had to say, "I don't get why people are projecting him so low. The guy was the best player in that league(AAC). He's strong as a bull, and he can play point guard."

Kilpatrick has worked out with the Wizards, Rockets, Raptors, Clipper, Charlotte, and Jazz too, but those teams seem to be more of long shots (FYI, each of those team names links to a different page; I know, the things I do for you). Fox Sports has SK headed to Denver, but that is the only traction I see for that path.

In sum, it looks like SK has a real shot at Indiana and San Antonio. I think he really fits the Spurs culture and could help maybe calm down the Pacer's locker room issues. I wish him all the luck and know he will put in the work to be successful wherever he starts and inevitably ends up.