Film Study; The Trials and Tribulations Of A Freshman

The 2013 season has been one of surprises through six games, on that much I think we can all agree. Perhaps the biggest (OK, second biggest) and certainly the most positive of the two has been the outstanding play of true freshman Zach Edwards.

Share All sharing options for: Film Study; The Trials and Tribulations Of A Freshman

A couple of weeks back DTD tracked where the true freshman were. At the time three had burned their red shirts, Zach Edwards was one, Travis Johnson and Mike Tyson were the other two. Four weeks later Zach is the only one left standing, but he's doing more than that, he is thriving. But that doesn't mean that he doesn't make mistakes, he's still a freshman. Last Friday nights contest with Temple provided a case study as to how it took all of three games to move the true freshman into the starting lineup, and why he is going to be there for a while. Edwards makes mistakes, but he also makes the kind of plays that you can't really teach.

For once the Bearcat offense started strong against Temple, you know, just to see how that felt. Apparently not that great because on the next possession it was three and out for UC and Temple got the ball back. Marcus Satterfield decided to loosen the reigns and let Temples true freshman quarterback P.J. Walker throw it around a little bit, but not down field. Not yet. Here is the entire drive.

It is the last play that I am interested in, but the entire drive gives the context. On back to back plays Temple gashed the Bearcats defense by running a cross buck action. In the most basic form the cross buck is the simple act of having two backs cross each other in the backfield to confuse the reads of the linebackers. It is a quick hitting play that can go for big yards if the defense abandons the flats, as the Bearcats dutifully do.

Back to back cross buck play action passes produced the two biggest plays for Temple to that point, and it put the Owls at the UC 35. At which point Satterfield attacked, guessing that the Bearcats would switch their strategy and attack the flats, and they did and the Owls grabbed a foothold in the game.

Like the two plays that preceded it the Owls strike came off play action. 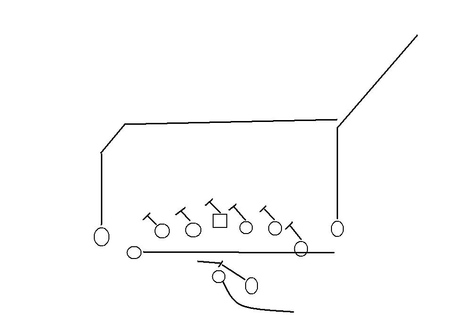 What Temple ran isn't some flashy exotic concept, its a concept that every team has in the playbook because it works. It floods the zone vertically so that defenders have to make choices, and those choices inevitably lead to one man coming open. In this particular scenario all the first level zone defenders make the same decision, jump the flats. Lets take it frame by frame. 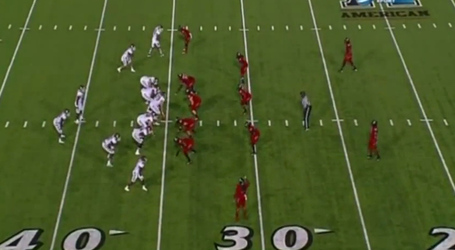 Temple is in 11 personnel. It looks like four receivers, but the wing of the bottom pairing is actually a tight end. UC counters with nickel and based on the pre snap alignment the Bearcats are in cover 2 with Edwards and Arryn Chenault as the deep safeties. 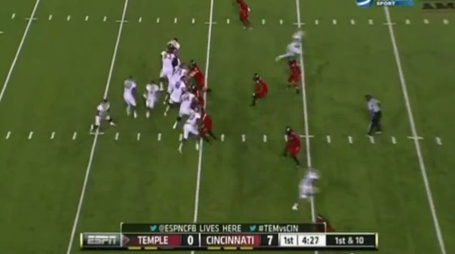 After the play fake the shape of the Owls play starts to coming into focus. They have two receivers stemming vertical to threaten the safeties, and a receiver crossing the formation to the flats just like the last two plays. Cover two is confirmed as the Bearcats coverage post snap.

Everybody jumps the flats, P.J. Walker has already turned his eyes downfield, he likes what he sees... 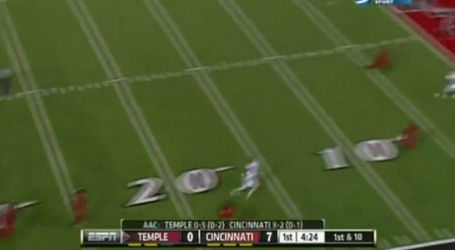 His receiver running free behind the safeties. 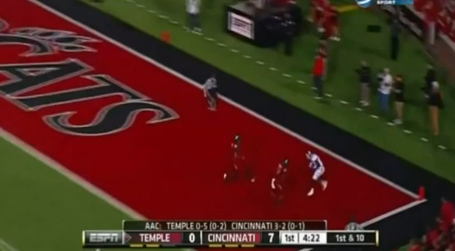 Its not a great throw, but it doesn't really matter. UC was beaten badly enough that Walker could have thrown Jalen Fitzpatrick to a stop. If you go to the 1:28 mark of the video and look at the TD from the end zone angle you can see that early in the route Edwards has contact with Fitzpatrick, but he looks at the quarterback guesses that it will be a deep out, but it is instead a post and UC gets burned for a touchdown.

It did not take Edwards very long to redeem himself.

Faced with first and 10 at their own 1 yard line the Owls come out with their jumbo bunch formation, a heavy run look on an obvious running down. The Bearcats move 9 guys into the box, rather near the box as Edwards and Howard Wilder aren't actually in it.

A couple of things about this play. 1) its a great call from Temple, they have UC beat and the chance for a massive play, possibly even a 99 yard TD is right there. 2) the throw is not great from walker. But this all comes back to Edwards.

It is impossible to tell from the angle what the coverage is, I want to say three, but I can't say for certain. What I can say for certain is that Zach made a phenomenal play. His first responsibility is the tight end, and you can see him engage in coverage with the tight end early in the clip. Then the play moves out of frame, the next thing you see is Edwards coming out of nowhere to undercut the pass for an interception. He passed off the tight end as he crossed the field at the 17 and tracked back 15 yards to pick off an admittedly under thrown ball to save what could have been another touchdown.

That is simply not the kind of plays you expect from a freshman, and yet Zach Edwards seems to have a knack for making precisely these kind of plays. He will only get better as his understanding of coverages and passing concepts improves. This guy could be special for the Bearcats.