Share All sharing options for: Film Study | The Vanderbilt Offense

One of the interesting things about Bowl Games, for me at least, is seeing the wrinkles that teams come up with in the course of a season to win ball games. College Football more than almost any other sport is such a coach driven thing. I like to see who the hot names are, and how they approach the games in terms of strategy.

I think that James Franklin is a good coach and a guy to look out for in the future. He is a bright guy who runs a very sound, if not altogether explosive offense. Most of the offensive coaching staff came to Nashville with Franklin from Maryland. Franklin himself comes from a more pro style offensive background. He worked with the Fridge at Maryland and with Ron Prince before that, he even spent a year working with the Packers in 2005. But the offense that Vanderbilt has run this year has very little pro style to it. The backgrounds of the offensive coaches is pro style, but the driving force behind it schematically is Herb Hand.

Hand is a really interesting guy in his own right. he is a very bright, very intelligent guy. If you want to know anything at all about the development of an offensive line Hand is one of the first guys you should find. Take my word for it. My interest in him stems from who he has coached for. In the past decade Hand spent years working with two of the brightest minds in the business when it comes to the spread offense, Rich Rodriguez and Gus Malzahn. Hand worked with Rich Rod for 6 years at West Virginia, though he didn't follow him to Michigan. Instead he took a step up the ladder becoming the co-offensive coordinator at Tulsa. The other Co in the equation was Malzahn. Together for just two seasons, 2007 and 2008 the dynamic duo lit it up, leading the nation in total offense in both seasons. They were kind of good and stuff.

Hand is not the offensive coordinator for the Dores, that is John Donovan who followed Franklin over from Maryland, but his influence on the offense is undeniable. You can put what Vanderbilt does on offense onto the same tree with Malzahn. Which basically means that it will look like they are doing a million different things on offense, but in reality they have 10 or so base plays, 4 runs, 6 passing concepts. On top of those they will show window dressing with shifts, motions and weird backfield action, all of which comes straight out of the Malzahn offense, which is available for purchase.

There are two big differences between what Malzahn has done in the past and what Hand and Donovan are doing with Vanderbilt. One is the blocking, Malzahn blocks gaps, which is synonymous with power. Hand is a zone guy. Nothing wrong with either approach, just two different ways to skin a cat. The other thing is that a lot of the motion stuff has been scrapped. It's still there, somewhere, but it isn't emphasized like it is at Auburn.

Setting aside Philosophy the guy to watch for Vanderbilt is Zac Stacy, a 5'9" 210 pound bowling ball that was among the most utalized backs in the SEC last season. Only Trent Richardson, Michael Dyer, and Tauren Poole had more touches, only Richardson and Dyer had more yards and only Richardson had more TD's. Stacy is a franchise back, certainly the closest thing Vandy has seen to a franchise back in quite some time. The offense is built around him, and they have gone out of their way to get him touches.

One of things that I really like about Vandy's running game is how they use unbalanced lines to gain a numerical advantage to the play side.

This look is another thing that is right out of the Malzahn playbook, usually with a quick huddle and then rushing to the ball to snap before the defense can even react to the formation and personnel. It's almost always a toss sweep, to either the backside or to the strong side. 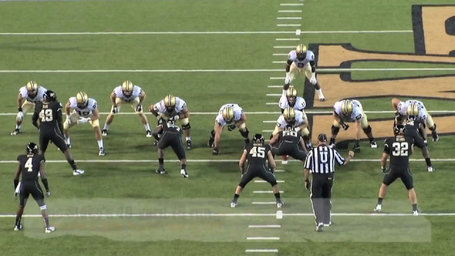 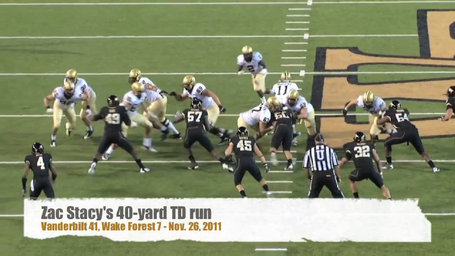 At the snap the Right Guard Josh Jelesky, the Right Tackle Kyle Fischer and TE/FB Fitz Lassing pull playside and lead Zac Stacy to the hole. Dillon Van Der Wal and Austin Monahan crash down on the playside end and tackle respectively and seal the edge. 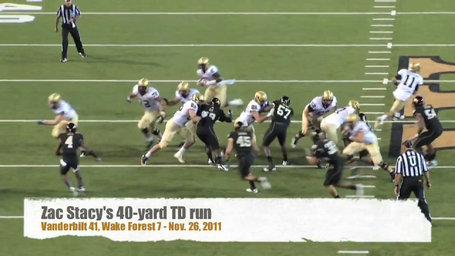 This is where you can begin to sense the enormity of the problem for Wake Forest. Vandy has a great running back with the ball, behind a convoy of blockers with one guy actually in position to take on the blockers. 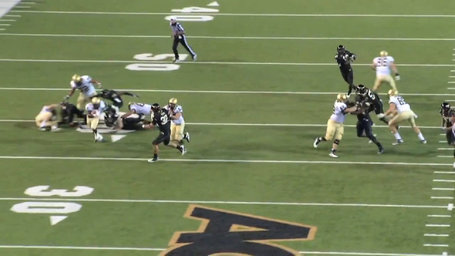 That was the moment of truth. Vandy had three guys leading into the hole where they promptly destroyed everything leaving people scattered on the grass, or field turf as it were.

That's the concern with this Vanderbilt offense. They will run their base packages to death. And they work just fine, the offensive line is very good, Vanderbilt is a surprising fourth in yards per carry in the SEC. They hammer the base stuff because Stacy is a rock who seemingly can't be tackled. But as a defensive coordinator the base stuff isn't what would worry me, its knowing that curve balls like this are out there, but not knowing when they will be used. Make no mistake, this Vanderbilt run game is going to be a challenge for the Bearcats front seven that has struggled with gap control in the run game at times.