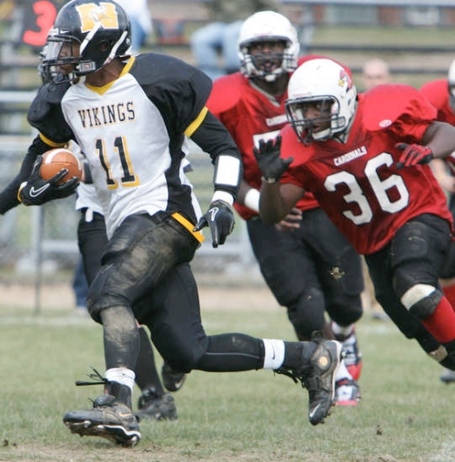 Akron North Athlete DeShawn Dowdy has committed to the University of Cincinnati.I thought that Butch Jones announcing that he isn't going anywhere would have a good effect on recruiting. It would keep guys from looking around just in case, maybe keep UC on the mind of whoever the staff is still persuing heavily. I didn't expect a commitment the very next day, but that's what happend today.

Dowdy is a what can only be described as a jumbo athlete. Standing 6'4" weighing around 225 Dowdy played defensive end and tight end for the Vikings. He also returned kicks, becuase you know it is perfectly natuaral for 6'4" 225 pound guys to return kicks. At the college level I have no idea where he winds up. He could play on either side of the ball and excell. I would prefer to see him on defense. He is really raw at the moment, he only has 1 pass rush move called "I am a freak and you are not so be gone mortal" or something along similar lines. So yeah one move, and he could do with a redshirt and some weight and to work on his technique. Take it from Dowdy's coach, Mike Laktash.

Laktash said. "DeShawn has all the potential in the world. He’s gone from football to basketball to track to AAU. He actually has not had much experience in the weight room. So he’s going to get big. He’s going to get strong."

Dowdy had offers from WVU, Iowa State, Maryland and UC along with half the MAC. Dowdy originally commited to Randy Edsall and Maryland. But after a couple of weeks he reversed field and decommitted, now he is a Bearcat. Perhaps the best news about Dowdy is that he has the option to enroll early at UC. Again with the Laktash.

Dowdy stopped playing AAU ball last summer, and he’s not going out for the basketball team this winter. Instead, Dowdy has loaded up on classes so that he can graduate next month and enroll at Maryland in January. Laktash expects big things out of his star player in College Park.

Needless to saying getting Dowdy in a college strength and conditioning program as soon as possible is vital. Regardless a hearty welcome from Bearcat Nation.