Share All sharing options for: Cincinnati Bearcats Football Recruit Round Up: Week 4 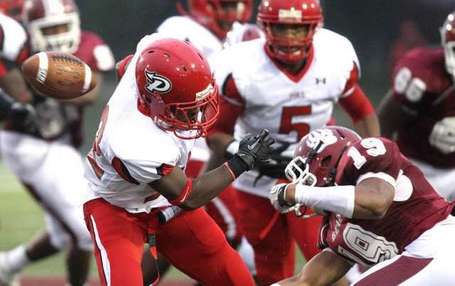 Andre Jones played well as a returner and made a big interception in Colerain's 17-14 loss to X.

Still have not found anything definitive about Ryan Leahy playing offensive line for the Lancers.

Jeremy Graves had two TD catches, plus a 2 point conversion on the night.

The Warriors received their stiffest test of the season against Ben Davis, Alama Mater of current Bearcat DT Jordan Stepp. Deionte Buckley was knocked out of the game in the course of the first half. Buckley did not return. He should be good to go next week. His backup had a big game running behind Deyshawn Bond. Josh Posely had a sizable impact on the game Jonathan Burt was out with an injury to his foot. Burt should be back in a few weeks.

Lester Liston caught 2 TD's, rushed for a 3rd and spearheaded a defense that allowed 21 points in a 50-21 whitewashing of Milford

Another day another shutout for Drake Bruns and the Bluebird defense. Bruns came up with a pick and a fumble recovery on the night.

Still nothing known on the status of Vinny Miller be he suspended, injured or somewhere else.

Errol Clarke and the Miami Central Rockets posted a last second win in their first game of the year. Clarke plays the same position that Dwight Jackson played for the Rockets last year and he really impressed in this weeks game.

Bennie Coney had another solid day at the office, 8 of 20 passing with 172 yards and TD tosses of 24, 47, and 59 yards. I'd like to see a slightly higher completion percentage, but its just one game.