With these Five Points the Bearcats lock up the world. What? No one likes British Empire based jokes and puns? Your loss. Anyways these are the things that I am going to be paying attention to during tomorrows game.

A Sharpening of the Offense

This is one of those games where the score is very much a secondary concern. UC will win and based on the line (34 at the time of typing this) it would be a colossal shock if the Cats don't cover. That doesn't mean that UC doesn't have anything to work on or to prove. This offense hasn't looked really sharp yet this year. They are still producing, at a high level. But the flow that you look for with an up tempo offense has been absent.

The defensive line has been the strength of the defense so far. But the caveat to that is that the front hasn't been particularly good at rushing the passer. Just 2 sacks on the year which ranks 76th nationally. With just two games in the books its way too early to write off getting pressure with the front 4. Akron's offensive line is dreadful and on paper Derek Wolfe, John Hughes, Dan Giordano and Walter Stewart should have their way. So I want to see that happen

Isaiah Pead is the best player on this team. And it's not even close. But the offensive staff seemed reluctant to acknowledge that fact in the Tennessee game. I am fully aware that Pead was a bit banged up in the second half. Pead dominated the first quarter, but in the second quarter the play calling went away from the run. Through 2 games Pead has just 24 touches, and only 17 of them came from the Tennessee game. Pead needs 25 touches a game against Akron.

Id love to see a little fire zone at some point. Is that too much to ask? 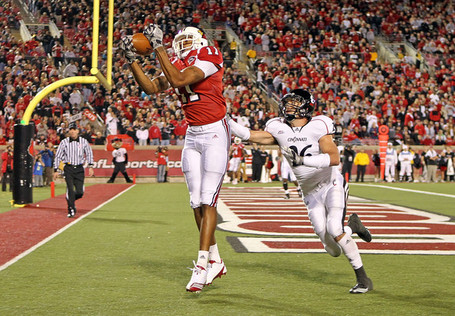 ... This is my nightmare