Deionte Buckley Named Top Running Back In The State Of Indiana

Share All sharing options for: Deionte Buckley Named Top Running Back In The State Of Indiana 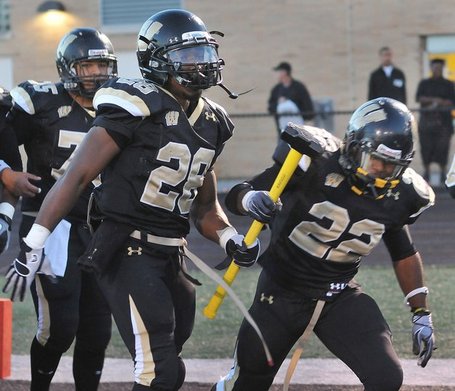 Please allow a break to your regularly scheduled March Madness for a brief bit of news from the top floor of the Lindner Center. Early enrollee Freshman Deionte Buckley has been named Mr. Football for the Running Back position in the state of Indiana. Don't take my word for it, take it from the man himself.

Just got awarded for being Indiana's mr.football for the rb position...blessed mannn...I'm officially the #1 rb in the state

That is a big honor for the Young Buck. Buckley isn't the only Warren Central Warrior on the Bearcats who was named player of the year for his position. Nick Temple was named Linebacker of the year last season before enrolling early at UC. Temple started 7 games as a true freshman this past season.

Early reports on Buckley are very positive. For a Freshman Buckley is really advanced in terms of his strength and power. He has been pushing Senior George Winn hard in the weight room. It wouldn't be a total shock for Buckley to carve out a spot in the rotation, even as a true freshman.

You want some highlights from Buckley's award winning Senior Season? Of course you do.

UC has finally gotten around to doing a press release on the matter. The award in question isn't the Mr. Football as originally assumed but the running back of the year according to goal post.