Of course the ever enigmatic Bones gets a spot on the list. Hell, he probably should get a spot on the list just for being the most tatted Bearcat ever. He came out of the blocks with one of the most impressive freshman campaigns I have seen. In 2007 he caught 62 passes for 862 yards and 13 TD's, all of which obliterated the Freshman records. The 13 TD's set a school record. Period.

But at the end of the 2007 season Bones broke his leg and was never the same afterwards. Mardy Gilyard was effectively shunted to the side when Barnett exploded down the stretch in 2007. But with the leg injury Mardy had a new lease on life, and we all know what happened after that. Bones did finally get healthy, but he never got out of Brian Kelly's doghouse and was stapled to the end of the bench until Butch Jones revived his career a bit, but he never regained his Freshman form and basically walked away from Clifton as the Oasis of Bearcat receivers. 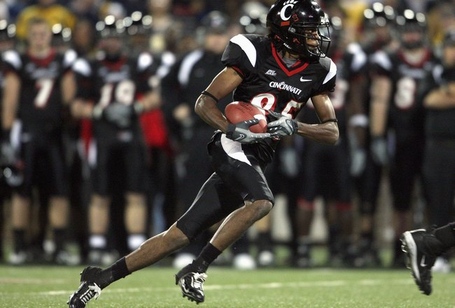