The Queen City native came on strong down the stretch to entrench himself in the tournament line ups. But the same thing was said of Shaq Thomas at this time last season. Will Kevin Johnson use his strong play late to catapult himself into a starting job?

Share All sharing options for: Kevin Johnson Season In Review

Like all freshmen Kevin Johnson had an up and down freshman season. Unlike most freshmen his downs and his ups came at two different points of the season. His non conference season was not a great one as Johnson really struggled with his shot for the first two months of his season shooting just 37 percent from the field including a 2-10 outing against Chicago State in the biggest blow out of the season.

With Sean Kilpatrick on the team there weren't going to be a ton of minutes available for the back up shooting guard. SK knew that, Mick Cronin knew that and KJ had to know that as well. Johnson had to provide Mick a reason to give him minutes with his play in the non conference and he didn't show Cronin enough to warrant inclusion in the main rotation. He was the 9th guy on the bench for the start of the conference season. From January 1st through the 6th of March KJ played 10+ minutes four times, all games Bearcat blowouts.

Mick Cronin's most highly regarded recruit since Lance Stephenson had a rough go of it as a freshman. Injuries and questionable shot selection hampered his production, but J-Law still possesses a ton of talent.

In the last four games he averaged 11 minutes, shot 53 percent from the field and 60 percent from deep and made a couple of big shots in tight games and generally made everyone ask why he hadn't played before. The long and the short of it is Sean Kilpatrick, but there is a bit more to it than that.

From the start of the season Mick was committed to playing with two guards, two wings and a post. No matter who was actually in the game at any given time that was the rough shape of the team. Moments with three guards did pop up but they were rare, usually in foul shooting situations or at the end of half where UC needed more shooting and ball handling. More to the point the three guards were almost always SK, Troy Caupain and Ge`Lawn Guyn.

Flash forward to March and the Bearcats offense, never a work of art, is deteriorating into a Wilfred Owen poem. Desperate for anything to punch up the flagging offense Mick goes deep into the bench and gives KJ more run, and KJ responds by taking and making big shots and playing defense at an acceptable level. Mick is never one to change his rotation that late in the season, but he did this season.

Was it the play of Johnson in practice that awoke him to his possibilities? Or a simple realization that he needed to shake his team up and turned to the only scholarship guard left? I can only guess, but I do know that giving KJ more run late in the year worked. To know why it worked we need only to look at the difference between his shooting splits for the full year and compare them with his conference campaign.

Now, it goes without saying that this is a small sample size....but that true shooting percentage is straight fire. His numbers from the season correspond to the kind of shooting that was expected from Johnson coming from Summit Country Day with a rep as a marksman. He was also really good going to the hoop for a relatively slightly built guard. His classmate Caupain is much bigger than Johnson but shot just 50 percent at the hoop while Johnson shot at the national average at the spot which is really good for a freshman.. 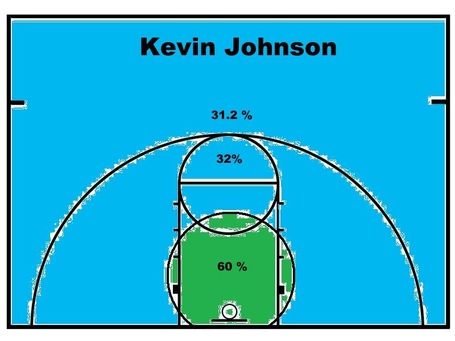 There is one other point that has to be made about Johnson and what he gave the Bearcats this year late. For much of this season there was an endemic problem with the Bearcats offense. Everyone outside of Sean Kilpatrick and Justin Jackson seemed terrified at the prospect of shooting the basketball. Now the statistics might say that was a wise thing, but it was maddening. I couldn't even begin to count the number of good shots that were passed up in pursuit of a perfect look. In a vacuum that that impulse to always look for a better shot is a good one, but it didn't serve these Bearcats well.

When you have to work as hard as this group did for good looks the pursuit for the perfect look turned folly. There were dozens of times where a Bearcat passed up a good, if contested, look and passed into an even more heavily contested shot. KJ was largely immune from this problem, when he got a good look he was shooting, and that was something that UC was desperately missing.

All in all Mick Cronin can't have many doubts about his approach to this season. He bagged a career high win total, a share of a conference title and the fourth straight trip to the dance. There is one thing that he will regret though, and that is not playing Kevin Johnson more this season, even if it meant going with a three guard lineup more often. I for one would have liked to see a SK, KJ and Troy backcourt for 5 minutes a game just for the offensive opportunities, even if it meant giving up something defensively.

When Jaquon Parker became a mainstay in the lineup after sitting out the early parts of the sweet 16 season with injury Mick made a joke of it. Cronin called himself and his staff morons for not playing Parker during his sophomore season. That season Jaquon "Grown Ass Man" Parker played just 23 games, averaged 8 minutes and had a run of 8 DNPCD's in 9 games including 7 in a row in the heart of Big East play. In hindsight that was a mistake and Cronin knew it. Next year he will be making the same quips about Kevin Johnson.

Less than 48 hours after the Bearcats played their most complete game of the season against Memphis. A game that had the Bearcats usual senior leaders physically and emotionally fatigued after a tremendous send off the Bearcats played Rutgers, and they were gassed.  KJ rode to the rescue scoring 8 points, on 3 of 5 shooting with 3 assists, a steal with no turnovers in 11 minutes.

Every year there is a player who thrived in a limited role and who will be tasked with a more expansive workload in the season to come. Coming into this year that player was Shaquille Thomas, heading into next year it will be Kevin Johnson. If you are drawing up a depth chart for the 2014-15 season* KJ is penciled in as the starting shooting guard at this moment. Deshaun Morman will have something to say about that, and Mick and Co. are actively looking for scoring help, whether that comes from the high school, JUCO or transfer ranks is anyone's guess. UC still has two scholarship's remaining and will try to use both. The transfer's are coming out in trickles at the moment, and there are 20 or so days until the late signing period starts** so there is still plenty to shake out.

Regardless at this moment Kevin Johnson is your starting shooting guard for the 2014-15 season for a couple of reasons. KJ knows the system, has live game experience, good chemistry with Troy Caupain, is fearless under pressure and most importantly of all, his shooting gives the Bearcats much needed spacing.

Moving from low volume bench guy to starter presents a whole new set of challenges. For one he is set to have a whole lot more of the ball this season. This season 25 of KJ's 41 makes were assisted, that's 61 percent. Next year he won't have nearly as many looks created for him. Johnson is going to have to create a higher percentage of his own looks than he did this year, and he is going to have to do that off the bounce. This year he was a knock down spot up shooter, but shooting a jump shot off the bounce is a more difficult proposition. With a bigger workload it would be asking a bit much for KJ to keep his three point shooting rate at the 47 percent clip he hit during conference play. But even getting him to convert at 37 or 38 percent would be a huge lift in the offense.