In the second entry of my player-by-player expectations for next year, I discuss one of two Bearcat seniors in Jermaine Sanders (Ge'Lawn Guyn being the other). Jermaine's strength affords the versatility to play both SF and PF. However, on a team riddled with good talent, how will the 6"5', 2010 pound senior's talents be used in the coming year?

The expectations for Shaquille Thomas next year are pretty clear... and pretty high for that matter. For the rest of the Cincinnati Bearcats roster things get a little less clear. Players are either in a battle for playing time (e.g. Ge"Lawn and Troy), we don't know how good they are yet (e.g. Gary Clark), or they have been too inconsistent in the past to really know who is going to show up.

Jermaine is an interesting player because he has the strength to play the 4-spot, but can step back and make it rain to the tune of 37.6% from behind the arc as well. His shot took a while to develop, but that never seemed to be much of a problem last year. As one of the best shooters on the team, Jermaine didn't get nearly enough attempts last year. When Jermaine was on the floor, he shot the ball less than once every 4.5 minutes he was on the court (725 minutes / 160 attempts).

Jermaine doesn't show a lot of emotion when he plays. I think the picture used at the top of this article is the most emotion I've ever seen on his face, but that's ok. As a rare senior on a team filled with freshmen and sophomores, Jermaine brings a high level of composure that we'll need next season. Whether Fifth Third is rocking, like last year during the Louisville game, or is an eerily quite half-full product of playing the lesser half of the conference, Jermaine maintains an expression like he is just shooting around by himself back home in Far Rockaway, New York... and I love it. 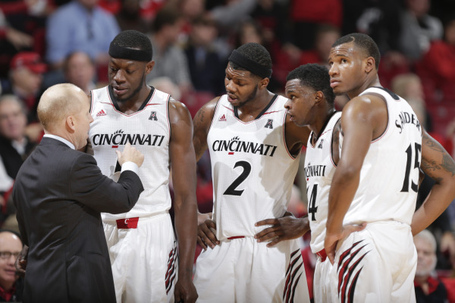 This is unbelievable. You may want to sit down before you read the rest of this paragraph. Jermaine makes 34.2% of two-point jumpers and 37.6% of threes (see shot chart). Can someone please show him that stat for me? Never-mind the fact that shots are worth 50% more from 20" 9' back, but even if they were of equal value he actually just makes more of his shots from deep.

I haven't discussed most players expectations for next year yet, but to oversimplify we should essentially have Shaq, Gary, and Troy slashing to the rim and Jamaree, Octavius, and Quadri working with their backs to the basket (Though apparently Quadri has a good touch from deep). When all this slashing and back-to-the-basket work is going on, Jermaine's defender will cheat to help and will not be as concerned with Jermaine. This is where Jermaine does his damage by drifting around the three point line to an open spot. If a slasher or post man does't get the look they like, they can kick it out to Jermaine for a solid 1.128 points (3 x 37.6%).

Next year, I would like to see the criminal justice major kill from the three-point line. Last year Jemaine was fifth on the team in scoring at 5.7 per, but we have 43.2 points per game to make up for due to the departure of SK, Justin Jackson, Titus, Big Dave, and Jermaine Lawrence. Sanders played just over 20 minutes per game last year and I expect him to play around that next year. If we can get 8 and 4 (points and rebounds) from Jermaine, we will be in good form.

The bigger goal for Jermaine isn't the numbers, but that teams may have to game plan for him. We want opposing coaches to have to tell players guarding Jermaine that they can't help out on Shaquille Thomas and co., but need to stay on their man (Jermaine). This will free up space for Shaq and Troy to slash through the lane. If their defenders don't listen to their coach, Shaq and Troy can kick it out to Jermaine to remind them of why they were supposed to stay put. Every great team seems to have a couple guys who sit on the three point line and wait for their turn to do damage (see Steve Kerr, Ray Allen, etc...), and for us, Jermaine is that guy.