The former Rice High School product posted career high numbers as a Junior and came up with a couple of memorable plays. But he remains imprisoned in an ill defined role.

Share All sharing options for: Jermaine Sanders Season In Review

Jermaine Sanders can shoot. He really can. His jump shot is not exactly a thing of beauty. It takes a long time from the initiation of the shot to the follow through. Sanders doesn't jump so much as hops, his legs and arms flailing in four different directions on his follow through while his body leans back like he's in a Fat Joe video. It is not a shot that inspires confidence at first sight, and yet it goes in. A lot. 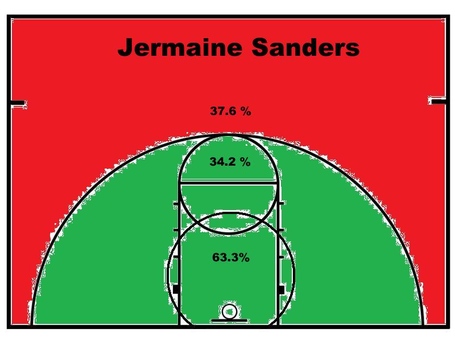 In the 2013-14 there are not many Bearcats who could be classified as above average shooters. Everyone else has at least one zone of the floor where they were icy, even Sean Kilpatrick had a zone of ice, but not Sanders. He alone of the Bearcats could stake a claim to being an above average shot from every spot on the floor. That's great, but its not all sunshine and rainbows. As undoubtedly effective as Sanders was when he decided to shoot it, he didn't decide to shoot it nearly enough.

One of the biggest problem for the Cincinnati Bearcats offense in 2013-14 was an over abundance of willing passers. There were far too many guys on this edition of the Bearcats who were willing to pass up a good shot (which were hard enough for this group to create) in pursuit of a perfect shot that was unlikely to ever come. One of the biggest offenders was Jermaine Sanders, who also happened to be the closest thing to a knockdown shooter that the Bearcats had. That was a problem.

Sanders was effective near the rim, but he didn't get there often this year having just 30 attempts at the rim. Likewise he was effective in the midrange, but wasn't operating in that area of the floor very often shooting 38 times from mid range. He was far more active from deep with 93 attempts, but he simply didn't get enough touches. His possession percentage was just 13.4 percent, by far the lowest of any Bearcat averaging 10+ minutes a game.

Not all of that is Sanders fault. He was a drastically under utilized resource in the Bearcats offense this season. So much of the offense was predicated on simply getting the ball in the hands of Sean Kilpatrick and Justin Jackson. Everything took a back seat to that. That is understandable given just how great those guys were this season. But the Bearcats did not have a systematic way to capitalize on that attention. Sanders could have been a perfect counterbalance to that.

For instance the Bearcats loved to get Justin Jackson and Sean Kilpatrick involved in the high pick and roll at the top of the key. That action got a lot of easy looks for both of those guys, but there were no built in counters to that. An easy one would have been to park Sanders in the strongside corner. In most defenses the strong side help defender would be called upon to rotate down to help on the roll man. Putting Sanders in that strong side corner would muddy that read and create an easy counter. You run the pick and roll as per usual, but SK reads Sanders defender in addition to play of the two defenders in the pick and roll. If Sanders man sticks to Jermaine the pick and roll is run as per usual, if he cheats inside on the roll SK hits the short corner for an easy corner three look for Sanders. That would have been good offense, and the Bearcats didn't have enough of it.

That was a game that was comfortably in control until it wasn't. Sanders played a season high 31 minutes scoring 11 points on four of six shooting including three of four from deep. He also grabbed four rebounds and picked up an assist in a narrow 61-60 win over the Houston Cougars.

It is unlikely that Jermaine Sanders will overtake Shaquille Thomas and become a starter at the three. At this point it would seem that everyone on the team knows Sanders role and is comfortable with it. He is a 15 to 20 minute player who gives you OK defense, good rebounding rates and reliable shooting and spacing on offense. That is what he does, and that is who he is. That doesn't mean that there aren't ways to improve upon your product.

For Sanders to be even more effective than he was this year it will be up to the coaches as much as it is to Jermaine to improve on his staring turn as a low volume high efficiency offensive machine last season. The Bearcats will not run their offense around Sanders next year, as they did not run it around him this year. But there are ways to build in good looks for Jermaine within the structure of the offense.*

*Cue joke about Mick Cronin not having any structure to his offense...

For example one of the most effective actions the Bearcats had this season was to get Sean Kilpatrick and Justin Jackson involved in a simple pick and roll, usually on at the top of the key but occasionally on the wing. Sometimes they would inverse it with JJ holding the ball setting a rub screen for SK who would cut hard off his hip to the rim. But that was really the only counter to that look that they had.

SK and JJ are moving on, but the pick and roll will stay on and be the main part of the offense. If I am Mick I would put the ball in the hands of Troy Caupain and run 1,000 pick and rolls a game. That is going to be the best offense that the Bearcats will have because the passing and awareness of Caupain will create a lot of clean looks for others. The key is that Mick and Co. will have to be smart about how they space the floor when they run those pick and rolls.

As well as the pick and roll served the Bearcats this year the lack of attention to detail in spacing allowed defenses to overload the playside and shut the play down before it started. Often the cats would clear out the strongside before running the pick and roll. That enabled defenses to blitz the ball handler while having help at the rim for the roll man in the off chance that the pass from SK would get through the blitz to JJ. It became too easy to defend.

A simple solution to that problem is to place shooters in both corners, and the other forward at the opposite elbow while running the same high pick and roll. Doing so ensures that you more or less know where the help is coming from, and how to punish them for helping. 99 times out of 100 the help defender will come from the strongside or weakside corner. At which point a quick skip pass to the far corner, or a direct pass to the strongside corner opens up an easy look.

Those are the kind of looks that Jermaine Sanders needs to be prepared for. It seems simple, but there were a lot of times this season where he would get an unexpected if routine pass and not be ready to shoot when open. Can't have that next year. Catch. And. Shoot.