Tommy Tuberville is a little old to really absorb the ethos of internet culture, but his natural inclinations and this quarterback situation have combined to create an instance where Tuberville is trolling his own fans.

Here is a link to the game notes and the depth chart itself.

QB-Legaux or Kiel or Evans

Before you have your regularly scheduled Munchie related freakout remember that Gunner Kiel has taken the vast majority of the first team snaps, has been the most consistent performer practice and the best of the bunch by a considerable margin when the Bearcats have gone live in scrimmages. Munchie has been running with the two's and occasionally with the one's. He has not been as consistent in practice or the scrimmages as Kiel. He has also not been touched at all this summer. All of which recalls the words of one of America's greatest philosophers. All signs, and logic, point to Gunner Kiel but Tubs is not giving up the game just yet. Here he is pictured in his office awaiting today's press conference. 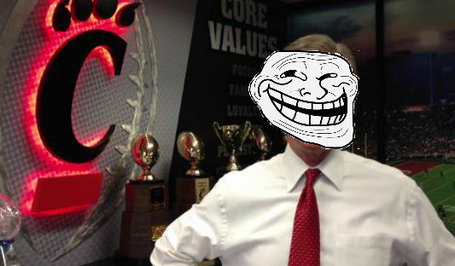 Two other interesting notes for the depth chart. The depth chart has the Bearcats lining up with a defacto 4-2-5 with LEVITICUS PAYNE starting as the nickel/slb which is how the Bearcats will spend the majority of the game against Toledo. It is not however their base alignment.

Three true freshmen are on the defensive depth chart, Carter Jacobs behind Zach Edwards; Cortez Broughton behind Cam Beard at Defensive Tackle and Linden Stephens behind Adrian Witty. At this point those are the three I expect to get their red shirts burned Friday night. Not listed on the two deep, Simone Tongamoa and Hakeem Allonce. I really think the Bearcats will red shirt both this year if they get a chance to.

The depth chart doesn't mean much for Tubs. Its something that he has to do, so he tends to play it fast and loose. But it looks like only long snapper Kirk Willis will be back in the same role he had in 2013. The rest of the special teams are turning over completely. Andrew Gantz and Sam Geraci will get the starts at kicker and punter. Johnny Holton and Chris Moore at kick returner and Shaq Washington and Casey Gladney returning punts. Nowhere to be found in the return game, RDA4.