Share All sharing options for: The Last Word West Virginia

This season is teetering on the brink. UC is still mathematically alive for an improbable 3rd Big East championship in a row. However, that isn't the most likely outcome, not by a long shot. To summarize a handy graph. 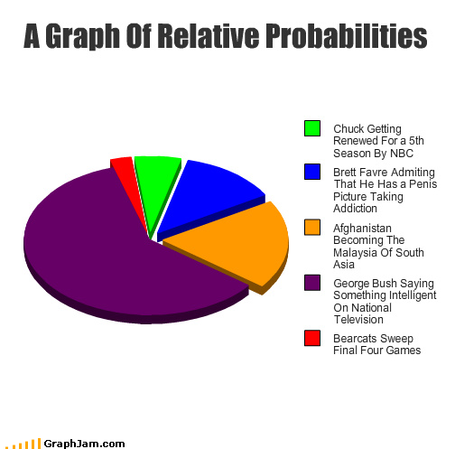 So yeah while a Big East Conference Championship is still mathematically possible, I don't think it to be all that likely. I would place a bet on UC missing a bowl game for the first time since 2005 before I would pony up on a odds that UC wins the conference.

The bottom line for me is that this team just doesn't have the consistency on a week to week basis as a team. There are certain areas where UC is very consistent, like the Run defense and the passing game. But as a whole it is impossible to expect the same kind of performances from week to week. Even on a series to series basis I can't anticipate much of anything.

So for the remainder of the year all I really want from this team is to be able to put another phase of the game in the dependable column. That is literally all I want and all that I expect from this team. It is a very harsh adjustment to go from being down 21 at Heinz Field and still having complete confidence in that teams ability to pull something out. To now, where I am desperate for this team to have another thing that they can hang their hats on going into next year. I, unlike most UC fans, didn't have very high expectations coming into the season. I viewed this year as a bit of a re-set, and it has proven to be thus so far. But sitting here with four games to play it is impossible to say that this team hasn't underachieved to this point. Underachieving in and of itself isn't always so terrible. But it is a very harsh juxtaposition to compare this team and their capabilities to the past couple of groups. But that's where its at. A win tomorrow would be great, but I would happily settle for another defensive performance like the one put forth against Syracuse.