The Subtle Differences Between Being Bad and Being Young

Share All sharing options for: The Subtle Differences Between Being Bad and Being Young

I have been kicking around a version of this post for a few weeks now. The season is over, there isn't much left to play for at this point. The season was effectively over after the Syracuse game which is when I started mulling the idea over. It is plain to see that UC has not played well this year, that much is very clear to anyone who has watched more than a game in the last two months. Fans at this moment are having flashbacks to the mid 90's Minter era where UC wasn't just not good, but not even competitive in many cases. There is a lot of angry all caps yelling going on in the UC centric message boards. THIS GUY IS WORSE THAN MINTER!, KRAGTHORPE 2.0! I DON'T HAVE ANY FRIENDS BECAUSE I RESORT TO MESSAGEBOARD TACTICS IN REAL LIFE DISCUSSIONS! LOUD NOISES! OK, so have I haven't seen those last two anywhere, but I have seen plenty of the first two arguments. I do not have the gift of foresight, so I could just be talking out of my ass here, but I don't really think that is the direction that the program is heading in at this moment. The reason that I have confidence that things will get better lies in the sublte differences between being bad and being young.

While that may seem like it's a cop out to what will forever be known as the Kragthopre Crowd in my eyes its the truth. I have heard ad nasium that Butch Jones was given a shiny new Ferrari 458, like this one. 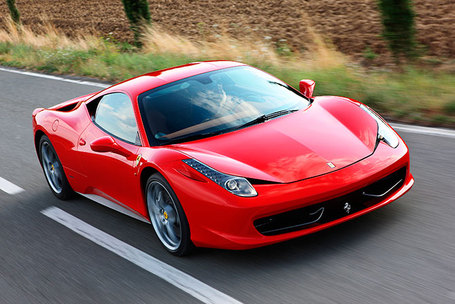 And it was a beauty to behold. With all that sleek body work, all that technological innovation, all that power how could anyone possibly manage to drive such a wonder  into the wall with such frequency and disregard. Some UC fans have come to regard UC Football as a Ferrari and that is the problem with their perspective. If you want to argue that the UC Football program is a Ferrari that has been thrashed and mangled by an inconsiderate prick who wants nothing more than to tear down all the work done by those before him you can. But you are wrong. It might have looked and felt like a Ferrari to some, underneath the hood it had a bad clutch, no oil and massive problems with the steering and alignment.

That's what no one is picking up. That's what everyone is forgetting in their rush to string up Jones by his neck in Fountain Square. On the surface UC does like every bit the performance machine everyone thought it was coming into the season, but it isn't. There are two things that separate the good teams from the bade teams in college football, depth first and foremost, and experience second. Those are two components that absolutely every team needs to have to be successful. UC doesn't have much of either. There is a rush to compare this season to the two that proceeded it and hold those up as examples. To use those years as examples of proof that Butch Jones is royally fucking up what was once a great program. But this years team has very little in common with the two that proceeded it. And it all goes back to the lack of depth and experience present on this team. Those teams in 2008 and 2009 were knee deep in talented and experienced players they were chocked full of veterans in a sport where having experience really does matter. Go and look at the depth chart for the last game. There are 7 seniors on it, just 7 out of a possible 44, of which 4 start, C.J. Cobb, Sam Griffin, Jason Kelce, and Ben Guidugli. John Goebel, Obadiah Cheatham and Robby Armstrong are backups and linebacker. To pound home that point home there are just 14 Seniors and on the 105 man roster there just 43 players who are Juniors or above. Anyway you slice it this is a very young and inexperienced team. Young teams have the tendency to improve, greatly, from year to year. Bad teams never really get better. It might be wishful thinking on my part but I firmly believe that this is just a young team and the depth chart would back me up on that.

As a result a ton of young players have been thrust into the starting lineup and into prominent positions where they have to play and produce, usually before they are ready to do it. Bill Koch couldn't be happier to have something bleak to report about UC Football. That's because he is shit at his job, as I have discussed before. Koch immediately makes the leap from the current struggles to the dark days of the 80's and mid 90's. When the actual comparison isn't that far away, it is instead to 2005, which incidentally was the last time that UC sported a roster this young and inexperienced with a relatively new coach. A young roster that would grow and emerge as the backbone of the record breaking run from 2007-2009. Hey Bill Koch that is the correct reference point to make you fucking idiot please know your UC Football history better.

This is not a defense of Butch Jones. He hasn't done a great job this year coaching, and heads will be sure to roll on his staff come December, (I would start with Tim Banks and Don Mahoney but the choice is yours). This is just an acknowledgment from me that he has been dealt a difficult hand, a hand more difficult that most people realize or acknowledge. As I will tell anyone that will listen to me, this was always going to be a down year, maybe not this down, but down. This team was always set up for a big run next year, and it remains set up for next year. So Jones gets a bit of a pass from me, for now. If next year winds up being like this year I can't imagine him surviving until the end of his contract.