Well this is long delayed. When I was mapping out the idea of reviewing the 2010 Bearcats Football season in my head I thought that I could get it all done and published by the end of December/beginning of January. Well here we sit almost two months exactly since the genesis of the idea and all I have done so far is a review of the special teams and a brief breakdown of the performance on third downs, both offensively and defensively and an extended look at the turnover margin.

Now is the time to start jumping back into looking at the season gone by with a position group by position group evaluation starting today with the Quarterbacks. Lets just start with the raw numbers of the season.

The first thing that jumps out at me when I look at those numbers in the completion percentage. 57.7 is just a really, really average number which suggests that above all this offense just wasn't that efficient throwing the Football. For comparisons sake the average completion rate during the Brian Kelly era was 63 per cent. Now I know that there are some key differences is the offense Kelly's affinity for the vertical game and the easier throws it creates, Jones preference for short intermediate throws and so on, but 57.7 per cent is a really low number. Even Mark Dantionio's teams managed to complete 58, almost 59 per cent of their passes. Continuing on with the efficiency drive the teams QB rating on the year was a paltry 131.68, which was good for 54th nationally and the second lowest number in the last six years, behind the Dustin Grutza helmed offense of 2005. So while Zach Collaros was the first team All Big East pick for this past season, his performance this year doesn't exactly stack up favorably with those who came before him.

The overall strength of a quarterback unit is usually beholden to the performance of the starter. So while both Chazz Anderson and Brendan Kay got to throw real live passes this year if you are talking about UC QB's you are talking about Zach Collaros. Accordingly the reminder of this post will be about Zach Collaros and his performance during the 2010 season. Overall I am perfectly happy with the performance of Collaros this season. The combination of a new offensive scheme, a pretty terrible offensive line and a slow adjustment period probably convened in some semi known way to keep his numbers in check a little bit. But when having your numbers held down a little bit means almost 3,000 yards and 26 TD's that just shows how good he is and can be.

When you start to dig a little bit deeper into Collaros's performance this year, and take a look at the splits from this season. There really isn't too much there that is out of the ordinary, he was generally better at home than on the road, had higher completion percentages and yards per attempt. That is a statement that could be applied to every QB in the country. But in terms of yards per game Nippert Stadium was only good for about 2 more yards per game than playing away from home. The other thing that jumped at to me was that Collaros got about 8 more attempts per game on the road versus at home. That kind of harkens back to what Butch Jones was saying at the beginning of the year.

Jones said from the beginning that he wanted the identity of the offense to be throwing the Football. That is what they strove to establish with their game plans. That showed early in the season when the offensive line was a disaster and Isaiah Pead seemed to be as forgotten as he was under Brian Kelly. The early results weren't great. Everyone remembered Collaros four game scorched earth campaign of 2009 which started with this and ended with this. But the first few games didn't recall those standout performances in the least, and there are some very good reasons for that.

For a start Brian Kelly and Co had Collaros in the program for two full seasons before Collaros so emphatically announced his ascendancy in the USF game. So Kelly and Quinn had a much better idea of what kind of player he was, what aspects of the offense he was most comfortable with and which weren't his cup of tea. The brilliance of Kelly is that he completely altered the offenses formations and personnel groupings to better suit the skills and preferences of Collaros. From that USF game until Pike came back to a full time role for the Illinois game UC used more two TE packages than they had shown in the entire year. That did two things for Collaros, it gave him a little bit more time in the passing game with Kazeem Alli and Ben Guidugli chipping on the ends before releasing and UC was a much better running team with those TE packages than without. It is no surprise that the best stretch the running game had in 2009 came with Collaros at the helm. Now armed with the ability to run the UC offense had the option of a play action passing game. It was the running of Isaiah Pead, and Jacob Ramsey that gave Collaros the ability to play action and bomb away on teams.

Flash forward 8 months and Zach Collaros is still a mixed bag. In road demolitions at the hands of Fresno State and NC State he played badly and then quietly well.But with two losses in three games Bearcat Nation is in the middle of a full blown panic, blame is flying everywhere from Kelly to Butch Jones to Mike Thomas. No one has any real idea about what is happening to UC and its vaunted offense, there were very few concrete ideas but there was a weapons grade concentration of vitriol that was being splattered on everything in sight.

At the time I was just like everyone else. I didn't really understand it. I was wondering what had happened to the wonderful and technologically superior Ferrari 458 of an offense that Butch Jones and Mike Bajakian had inherited. It was still a Ferrari 458, I saw all the components were there to make a beautiful 458, but the early on field results were a little, um, inflammatory. 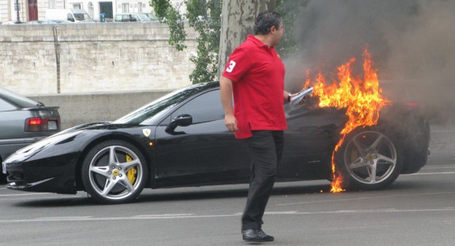 The line wasn't playing great, there was a spat of injuries, headlined by the season ending loss of Vidal Hazelton in the Fresno State game and nagging injury that effectively cost Pead the Indiana State and NC State games. But come the Oklahoma game everything started to fall back into place with the offense. Alex Hoffman moved outside to Right Tackle, Isaiah got healthy and the offense was ready to rock and roll. While the injuries were a major factor to the early season performances of the offense. The biggest problem was that Bajakian was asking Zach to do things that aren't exactly his specialty, like sit in the pocket and make plays. I love Zach's game, but that is just not it. He can play there and play well, but he is at his best when he is at the edge of the defense on play action and designed rolls.Tony Pike is a great pocket bound player, Collaros is not. It took the staff a few games to come to that realization, but once they did he took off.

The Jones offense is one that doesn't create a ton of opportunities for his QB to get on the edge of a defense with a run pass option. Even when they had Dan Lefeavor and his near 3,000 career rushing yards up at Central Michigan they were a pocket passing team. They didn't roll the pocket a ton and they seldom waggled off play action looks, no short rolls ect. basically, the Butch Jones offense, used as designed is not entirely within Zach Collaros's comfort zone.

Zach is an adequate passer in the pocket, but he is phenomenal on plays designed for him to get to the edge of a defense with short, intermediate and deep throwing options. He is more accurate and generally makes better decisions on the edge than in the pocket. It took Bajakian and Co three games to figure that out, and once they did Collaros was great, starting with the Oklahoma game where he looked like his old self again.

The key point here is that for this offense to open up all the possibilities in terms of rolling the pocket, waggles, bootlegs and the like, there has to be a running game. If not it is far too easy for the defense to combat those looks by rolling coverages, using a zone blitz ect. The importance of the running game in allowing Zach to perform at his highest level is something I touched on in the aftermath of the Oklahoma game. So while this is a quarterback centric offense without question. It is one that needs a good running game for this particular QB to be at his best. For a statistical representation of the importance of take a look at the numbers for Collaros in games where Isaiah Pead went over 100 yards (Oklahoma, Miami, Louisville and Rutgers) versus those where he did not (*)

*(For the sake of fairness to the data I have left out the statistics from the Indiana State game from this exercise. While the game against the kinda-sorta-not-really-mighty Sycamores counts in the eyes of the NCAA, Bowls and the Lord (I guess) we are all adults here and can recognize an exhibition game when we see one.)
Zach Collaros is a good player with the potential to be truly great. But this season for several of the reasons expressed above he needed help from others to reach his true potential. You can choose to knock Collaros for needing some help from the running game to make his game as good as it can be, but I don't. As a QB you always need talent around you and a scheme that puts you in a position to succeed. This year he had the talent, and the scheme is, well the scheme is getting there. It was certainly improving towards the end,
Anyways what is your grade for the QB's as a unit and Collaros in particular? Drop your comments down below.