Share All sharing options for: February 22nd Jump Off

It is a Cult kind of day. Can't really help it, there is nothing to be done for it. So we all might as well celebrate the fact and move forward and make due with the rest of the day.

Themes of 2010-11 on Display against Cincinnati: Friar Basketball

It was a microcosm of the season.  In an exciting game at the Dunkin Donut Center on Saturday night, a spirited Providence rally fell just short once again.  Close, but just not good enough.

Following a deflating loss to Depaul and trailing by 17 with seven minutes to play, it looked like the Friars might roll over, but they followed the lead of sophomore Duke Mondy and scrapped their way back into game, eventually taking a lead on a baseline leaner by Marshon Brooks with 37 seconds to go.

Friars rally but fall back in overtime: Providence Journal

After two deflating defeats in three days, you’d think the Providence Friars would be down in the dumps right about now.

That may be the case for the 12 players on scholarship but it seems that coach Keno Davis isn’t taking the losses as hard as some fans may think. After showing plenty of heart to turn a near-blowout into a near-thrilling comeback win, the Friars were pasted in overtime and lost to Cincinnati Saturday night, 93-81.

The last 9 minutes of the second half were god awful. The offense became incredibly stagnant. The defense became loose. It seemed like the Bearcats assumed that Providence was just going to roll over and take the loss. Instead, the Friars started believing they could win, and UC couldn't turn it back on. This team is not good enough to do that. Not at all.

"We were looking for the clock to end. We did a bad job against their press. We just didn’t handle it well."

Cashmere Wright has never appeared as comfortable in his role as the University of Cincinnati’s point guard as he does now.

Since the St. John’s game, Gates – a 6-foot-9 junior forward – has played with renewed purpose. He scored 21 points with eight rebounds in UC’s overtime win at Providence on Saturday. In the game before that against Louisville, he produced eight points with six rebounds. He also did a good job of passing out of the low post to create quality shots for his teammates.

Middletown High School athletic Director Gary Lebo is pleased to announce that Troy Everhart has accepted the position as the head football coach, to start March 1, pending the approval of the Board of Education at the February 28, Board of Education meeting.

"Justin had a great first weekend as a Bearcat," UC head coach Brian Cleary said. "This recognition is well deserved and I’m proud of him and his performance."

Originally drafted by the LA Galaxy in the first round of the 2004 MLS SuperDraft (No.13 overall), the 5-11, native Freeport, Texas, native joins the Crew after spending the last four seasons in the USL-1 (Seattle Sounders 2007-08) and the USSF D-2 (Carolina RailHawks 2009-10). Gardner was UC's first MLS draft choice.

The Bearcats scored a total of 58 points, which tied them with University of South Florida for sixth place. University of Louisville was the champion in the women's division with 110 points.

Before we get into the specifics, can we talk about the fact that Syracuse just won a Big East road game against a quality opponent? For all the complaining some folks have done about our inability to blow out Rutgers and other non-quality teams, let Monday's 69-64 victory over Villanova in Philadelphia be a reminder that this team, for all its troubles and issues, has the talent to hang with just about anyone out there when it wants to.

Calhoun to be cited by infractions committee: The UConn Blog

After months of radio silence, the NCAA committee of infractions is back, and this time it's gunnin' for Jim Calhoun.

So says ESPN's Andy Katz, who, citing a source, reports the committee will cite Calhoun for "failing to create an atmosphere of compliance" when it finally releases its ruling on alleged recruiting violations on a conference call today at 3 p.m. ET.

1. William Howard Taft, Nose Tackle. A big man with good hands. Thicker than a copper bathtub through the ass, an important asset when talking about nose tackles. Nimble enough to construct Anti-Trust legislation and then properly evaluate it as a jurist. Endurance (one term) is an issue.

As someone who walked by this clearly less than life sized statue every day for three years I can attest that is a solid pick. 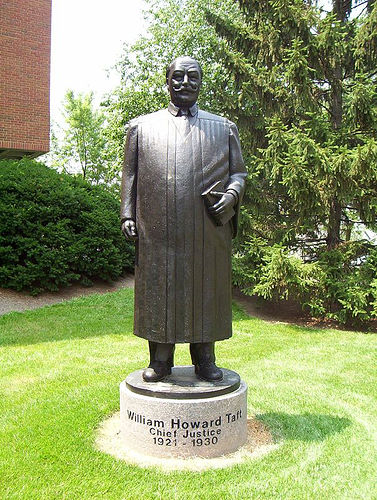 Jenkins to have jersey retired while still playing: Ballin Is A Habit

There's no questioning that Hofstra's Charles Jenkins has been a great player.

He's one of just three players this season leading his conference in scoring (23.3 ppg) and assists (4.8 apg). He's scored 2,420 career points, second in the CAA only to some guy from Navy named David Robinson, who had 2,669 career points. He's also on track to receive his third consecutive Haggerty Award as the best D-I hooper in the New York metro region. Only Columbia's Jim McMillian (back in the late '60's) and St. John's Chris Mullin have done that.

Reading This WIll Make You Smarter

Sepinwall-style criticism has obvious strengths. Week-to-week coverage reflects how people actually watch their favorite shows—we rehash the best lines, parse the meaning of weighty moments, and anticipate plot twists. At its best, new-school TV writing is brainy and inquisitive, thoughtful commentary borne out of a fanatical attention to detail. But hypervigilant criticism, written by obsessive fans for obsessive fans, isn't necessarily an unmitigated force for good. Is it possible that today's TV writers are sitting too close to the screen?