Down The Drive Ring of Honor: Trent Cole; The Bearcats Big Game Hunter

Share All sharing options for: Down The Drive Ring of Honor: Trent Cole; The Bearcats Big Game Hunter 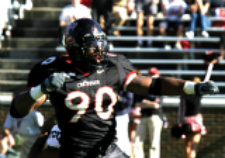 In the twilight of the Rick Minter era in the Clifton the Bearcats produced a run of great pass rushing defensive lineman that wreaked havoc upon Conference USA foes. The first in the breed was Antwan Peek. He wound up leaving UC with the school records for Sacks in a season and a career and the career record in Tackles for Loss. Coming on Peek's heels was Trent Cole a young turk hailing from Xenia with a passion for hunting game and quarterbacks.

Cole turned heads from the moment he stepped on Campus. His Freshman year Cole was initially placed at nose guard and he made 9 starts at the position before he was moved to end. But he was named the Defensive Newcomer of the Year for 2002 . Next year he assumed a starting role opposite Frazier with Mike Wright in the middle of the defense.

Cole was a member of some supremely talented Bearcat squads, particularly defensively, that couldn't quite get everything to fall into place. He was a member of the 2002 C-USA championship squad, but even that team weren't exactly world beaters. They were perennially a 7-5  or a 5-7 team. Over his four years on campus Cole walked off campus with. Ultimately that wasn't enough for Rick Minter to keep his job and lead the team into the Big East.

In his final year with a new coaching staff Cole blazed a path of destruction and devastation registering 86 tackles, 8.5 sacks and 22 tackles for loss en route to third team All America honors. He was selected in the 5th round of the 2005 NFL draft by the Philadelphia Eagles. With the Eagles Cole has blossomed into a Pro Bowler as a defensive end.

Conor Barwin; Jack of all Trades