Share All sharing options for: Down The Drive Ring of Honor: Mike Mickens; The Cincinnati Bearcats Pick Six King 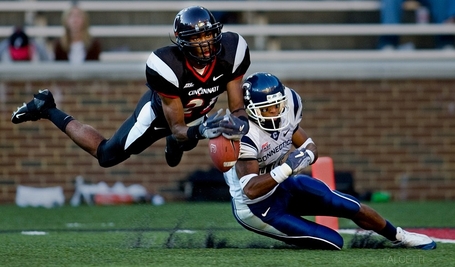 Mike Mickens will always be one of my favorite Bearcats. There is a certain amount of confidence that comes hat in hand with having a corner back of his caliber in the back end of your defense. Intrinsically you just know that the oppositions best receiver is in for a rough day. In that scenario there isn't much to fear from the passing game.

Mickens didn't come to school laden down with recruiting hype. In fact like many UC players the burden he carried onto campus wasn't one of unrealistic expectations, it was a block of granite placed on his shoulders by all those schools that had told him that he wasn't good enough. But he was plenty good enough for Mark Dantonio and Pat Narduzzi. He turned heads as a freshman, along with a lot of the guys from the class of 2005 that formed the foundation of the 2008 and 2009 teams.

All those guys took their lumps that year but Mickens was the head turner. He was named 2nd team All Big East as a Freshman and was considered a freshman all American by multiple publications. It was a prelude of things to come. In 2006 Mickens continued to progress and was established as one of the top dogs among Big East corners.

I could go on and on listing Micken's feats and accomplishments. School records for Interceptions, interceptions returned for TD's, Interception return yards. He is the only Bearcat to be named all conference four years running in the history of the program. But that doesn't begin to describe what having him on the team for his four years meant, and it is this simple. Mike Mickens allowed us all to stand at attention with almost no care in the world because we knew that Mike Mickens was always there. Ever present roaming in the defensive secondary, reading the quarterback, waiting to break on the ball and take it to the house.

Conor Barwin; Jack of all Trades