Share All sharing options for: Down The Drive Ring of Honor: Mardy Gilyard; Cincinnati's Dreadlocked Hero 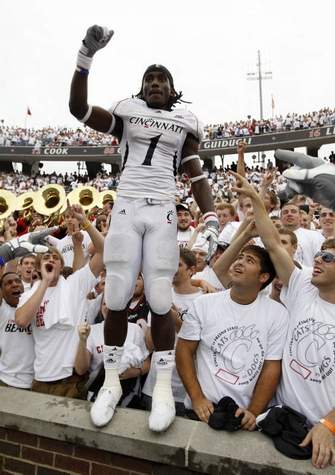 The city of Cincinnati really loves reclamation projects always has. It's one of the things that makes Cincinnati Cincinnati. This place is it's own little world with it's own peculiar rhythms and points of view that aren't shared by the citizens of the states surrounding it. It's fitting for a city named after Cincinnatus to be so loyal to those that are loyal to them. In many ways Mardy is the quintessential UC story. He came to Clifton unheralded, the Bearcats were his only offer at the time, and wound up playing out of position at defensive back for Mark Dantonio. He managed to work his way completely off the team and out of the University....

I don't know why I am bothering to retell this story. There isn't a member of Bearcat Nation alive who can't recite the narrative by heart at this point. Gilyard screwed up, he is the first guy to admit to that. But given every opportunity to quit, to give up he instead worked his ass off, on and especially off the the field. When I came up with the idea for you guys to get involved and create our own Ring of Honor here at Down The Drive I knew then who was going to win. It's Mardy. That's not a knock on the other guys. But Cincinnati is a very insular place and they will always rep those that rep them. And nobody repped harder for Cincinnati than Mardy. Highlights for days after the jump.

And because I can't really do this post without posting the play he is most famous for, even though it was an incompletion.

Connor Barwin; Jack of All Trades