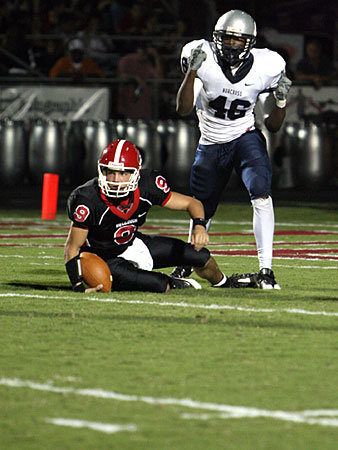 Norcross is known primarily as a Basketball school but they have had some success on the Gridiron both in terms of producing high level talent and winning. Since the 2007 class went through the Bluedevils have produced multiple BCS signees for 4 years running with schools ranging from Alabama to UConn, and USC to Georgia. Nobody talks about Norcross in the terms of a Miami Northwestern or a Glenville, but I can assure you that they are in a very small club in terms of producing talent.

Alston played a ton of positions for Norcross coach Keith Maloof. At various points in 2009 he lined up as an outside linebacker, defensive end and as a defensive tackle. That kind of versatility is a big deal. Rivals even evaluated him as an athlete.

Versatility can be a double edged sword when trying to evaluate someone. On the one hand you like to see a guy playing multiple positions because it implies a great deal of athleticism. On the other hand shuttling a guy between positions means that he doesn't get the chance to master one position or one particular aspect of the game. Alston cleary is athletic on film. He moves fluidly and has pretty good hip flexibility, but you have to question a little bit his understanding of a defenses structure from the linebacker position.

IMO opinion three things are going to prevent Alston from seeing the field this year. One, fellow Freshman linebackers Nick Temple and Dwight Jackson both enrolled early and got a jump start to their careers. Both are likely to be fixtures in the two deep. Second Butch Jones went out and got Ben Pooler and Greg Blair to provide veteran players to bolster the linebacker position. And three Alston was always likely to have the biggest adjustment among the incoming linebackers because he simply has played less snaps there than everyone else. Alston didn't report with the other freshman a couple of weeks ago. I don't want to read too much into it as he could just be forgoing the now traditional summer school thing and will report for camp when it starts. Either way I think Alston is bound for a redshirt this season.