Share All sharing options for: Greg Cook Will Forever Loom Large In The Evolution of Football Strategy 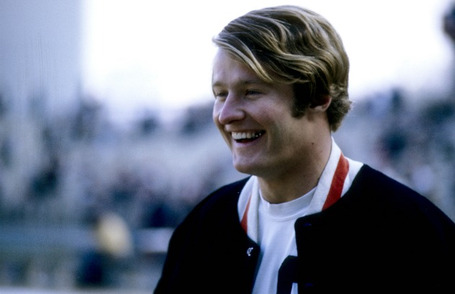 "Greg Cook," he said nostalgically, his eyes getting a little misty. "What a great, great talent. What a terrible shame."

Like Bearcats everywhere I was saddened immensely by the news that Greg Cook passed away last Friday. Cook was a once in a generation talent and is probably the best quarterback to ever suit up for the Bearcats. Gino Guidugli and Danny McCoin broke his records, but Cook still looms large as an epochal talent and a man who made a phenomenal impact on the course of the game of Football. And he did it with just 10 quarters of Football at the professional level.

Cook's impact is intertwined, almost completely, with that of the late great Bill Walsh. When the Bengals drafted Cook they got him for all the reasons that everyone else wanted Cook. He was big, he was strong, had a rocket for an arm and was a threat with his legs as much as with his arm.

The unknown quantity was that at UC Cook had played for Homer Rice and his Offensive Coordinator Leeman Bennett. In the late 60's the duo were one the cutting edge of Football strategy. At the time option Football was beginning to take hold of college football, particularly Bill Yeoman's veer at Houston. What Rice and Bennett did in their time at UC was perfect and offense that married the option running attack sweeping the country with a complex passing game that stretched defenses vertically. Rice even wrote a book on the offense he ran with the Bearcats and in his later stops. The offense was ahead of it's time and Cook put up monumental numbers in his final two seasons as a Bearcat. Cook's time with Rice and Bennett, both of whom would go on to be NFL coaches, was the perfect training for what came next.

During Cook's senior season the upstart Bengals hired a then unknown coach from California to run the passing game. Bill Walsh has long since been linked with the intricate passing offense that he perfected as Paul Brown's offensive coordinator. The West Coast Offense is effectively indistinguishable from Walsh's name at this point.

But what has gotten lost in the linear narrative of history is the impetus behind the creation of the offense. Prior to coming to Cincinnati Walsh was hand picked by Al Davis to join the Raiders staff when he stepped away from coaching in 1966. Davis no longer coached, but the Raiders offense was all him. It has long since become fashionable to mock Davis's infatuation with the long ball. But it is important to remember that Davis, and his offense* were way ahead of the curve in the mid 60's.

* Davis learned the passing game from the great Sid Gilman who is still, in my opinion, the best coach ever to lead the Bearcats onto the turf at Nippert. The lesson, as always, Cincinnati kicks ass.

So with his first experience in the coaching business Walsh was placed on the cutting edge of Football strategy at the time. After a year coaching the San Jose Apaches of the CFL Walsh moved to Cincinnati where he became the defacto offensive coordinator.

His first year his QB was John Sotfa, a player all but the most diehard of Bengals fans would struggle to remember. That season Sotfa completed just 48 per cent of his passes and threw as many TD's as INT's. Walsh knew he needed a QB, and lucky for him that QB happened the share the same field. The Bengals took Cook with the 5th pick overall and Walsh installed him in the offense and with his ultimate weapon in hand proceeded to assault defenses through the air in 1969.

Walsh was just one year removed from his stint on Davis's staff and the passing game he used in that 1969 was still very much rooted in the concept of the vertical stretch. That season Cook completed 54 per cent of his passes threw for 1854 yards 15 TD's and 11 INT's. He averaged a whopping 17.5 yards per completion. And he did all that despite missing three games with the injury that wound up costing him his career.

I bring this up for a simple reason. The modern narrative about Bill Walsh and the design, implementation and subsequent evolution of the West Coast offense tends to start with Virgil Carter. In the Blindside, Michael Lewis's' phenomenal book on the evolution of Football (and Michael Oher) Carter is the starting point for the creation of the game as we know it today. That's true, but it really isn't.

So how did he change the face of NFL football, you ask. Well, in 1970 the Bengals traded with Buffalo for Virgil Carter, a small, active, very heady quarterback originally from the Brigham Young passing factory, a guy who taught math in the offseason at Xavier University. And Walsh designed a system to take advantage of his talents.

A lot of motion. "Swooping and swerving," as Paul Brown called it. A lot of rollouts, underneath throwing, maximum use of backs running horizontal routes off lots of picks. Not entirely gone, but certainly no longer a prime factor, was the deep attack. A year after he joined the team, Carter led the NFL with a 62.2 percent completion rate and an offense was born. It achieved perfection with Joe Montana and the Walsh 49ers.

The story starts with Cook, the Football Adonis, who was probably the most talented QB of his generation. Actually, there is no probably about it. His peers have long since reached that conclusion. For sheer talent alone Cook was a once in a generation player. For one season Walsh had the 70's Football equivalent of a weapon of mass destruction. And it wasn't even one season, it was 10 quarters. 10 quarters of a healthy Greg Cook.

It was only when deprived of Cook and forced to use Virgil Carter that Walsh had to go back to the drawing board to find a scheme that would work with the foibles of Carter and his limited array of talents. That scheme grew to become what is known as the West Coast offense. For whatever reason Carter seems to be the one likely to go down as the catalyst for the modern passing game. And that's unfair. That place in history should be Cooks because it was his absence in the 1970 season that forced Walsh down the path that became, ultimately, his legacy. At this point every serious Football fan knows by heart Walsh's story, his path, by heart. But so few know why he went down the path, or that if given the choice Virgil Carter would never have seen the light of day. Or that the ubiquitous basis of Football offense today would probably be completely different. Take it from the man himself on what his offense would have been like with Cook at the controls for a decade.

"Completely different," he said. "It would have started with the deep strike, and everything would have played off that. It would have set records that never would be broken.