The Bearcats Season ended on Thursday, which was far too soon for anyone's taste. The same factors that doomed the Bearcats against Harvard have plagued the team for the past few seasons. A generally stagnant offense made worse by a general shortage of shooting.

Share All sharing options for: Bearcats Shooting A Tale Of Woe In 2013-14

Note: If you are a statistically rigorous person who cares deeply about the quality of data used in making arguments you might want to start here with this asterisk that got way out of hand. If that sentence does not include you please proceed.

Here is the Bearcats shooting percentage by location for the 2013-14 season. 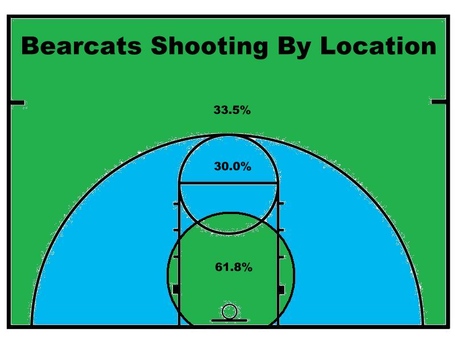 In November we published a piece about the changes that the Bearcats offense had in the 2013-14 season relative to the ones before it. It was very early in the year, but the trends were positive. The question at the time was whether those trends would hold for an entire season once the competition stiffened. In retrospect it seems those trends were a more extreme The trends were maintained, if at a lower rate than they were early in the season.

Lets be honest, any team that has Sean Kilpatrick on it is going to end up with a large portion of its offense being three point shots. Indeed it did with 30.9 percent of all Bearcats shots coming from deep. In the end this is what the shot distribution was like compared to the previous two seasons.

We can easily say that this was the most aggressive offense of the recent Mick Cronin era. I would love to have this data going back to the Deonta Vaughn era, but alas hoop math was started in 2011 so that is what there is to work with. The biggest difference from the first post to this one is the increase in jump shots.

That checks out with the eye test. In conference play against the really elite defensive teams in the conference the Bearcats struggled to get the ball to the rim and settled for jump shots a lot. Also vibing with the eye test is the shooting numbers.

As a team the Bearcats were basically average from deep, average at the rim and ice cold anywhere else. Average though they were this season, the shooting numbers were still up over the last two seasons. Here are the corresponding charts for 2011-12 and 2012-13. The 2011-12 team was better from three point land then this group, but the difference isn't what I would consider to be statistically significant.

That a team that shoots bad shots must at least have the decency to make them is not a truth universally acknowledged to be true. But it should be, and this team did not. But for as bad as this team shot the ball it was actually rather efficient as on offense. They scored at 1.08 points per possession this season, tied for the highest rate in the Mick Cronin era with the 2010-11 group. I guess that means that as painful as it was to watch this team play offense, that pain was with a purpose. This week we take a good long look at the Bearcats offense on a piece by piece basis. Maybe in the process we can figure out where things took a turn for the dreadful at the end.